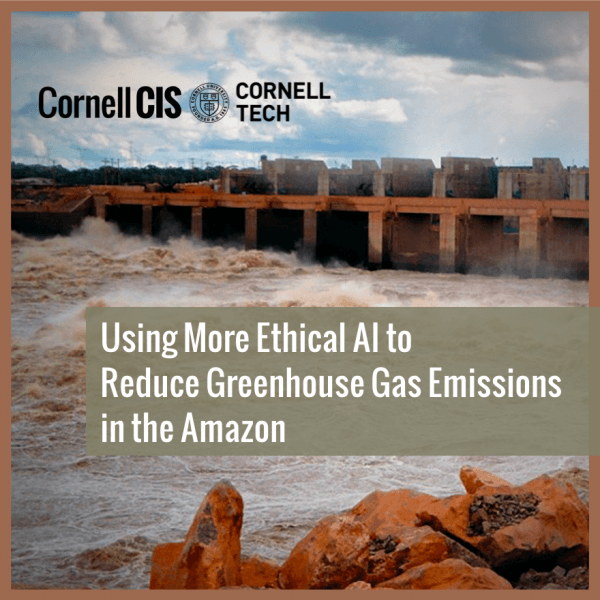 Computer Science Professor Carla Gomes and her students continue to develop more ethical AI algorithms —ones that can evaluate decisions based on multiple criteria, instead of the single objective perspective that is traditionally used. The ability to reason about multiple objectives is critical for many real-world applications. In their latest initiative for more ethical AI, and in collaboration with ecologists and researchers from South American organizations, they applied their approach to study the impacts of the proliferation of hydropower dams in the Amazon basin—simultaneously considering energy production and greenhouse gas emissions.

This work was published in Nature Communications in a new paper entitled “Reducing Greenhouse Gas Emissions of Amazon Hydropower with Strategic Dam Planning.” The paper addresses the paradox that while “[h]ydropower dams can provide large quantities of energy with carbon footprints as low as sources like solar and wind,” they may yet “emit dangerously high levels of greenhouse gases, threatening sustainability goals.”

Co-lead authors include Rafael Almeida, a postdoctoral research fellow with the Atkinson Center for a Sustainable Future (who is co-advised by co-lead author Alex Flecker, professor of ecology and evolutionary biology); and Carla Gomes.

Gomes and her team have developed a general AI “divide-and-conquer” approach that was used to evaluate how hydroelectric dams might be identified that maximize energy production while minimizing greenhouse gas emissions. In order to make that happen, “[w]e needed to develop algorithms that are able to reduce this problem into subproblems and, in a smart way, put together the results to produce solutions with the lowest greenhouse gas emissions, for given energy targets.” As Melanie Lefkowitz writes in her article on the new research: “Using the [computational] model, the researchers can identify the combination of dams that would produce the lowest amounts of greenhouse gases for a given energy output target.”

Additional members of the research team, and co-authors, include: Qinru Shi, a doctoral student at the Center for Applied Mathematics, advised by Carla Gomes; and Suresh Sethi of the New York Cooperative Fish and Wildlife Research Unit. Also contributing to the paper were researchers from Stanford University, the Stockholm Environment Institute Latin America, the Federal University of Juiz de Fora, the National Institute of Amazonian Research, Michigan State University, the Cary Institute of Ecosystem Studies, the Wildlife Conservation Society, and the University of California, Santa Barbara.

The research was supported by the Atkinson Venture Fund, the Atkinson Postdoctoral Fellowship Program, the National Science Foundation, the Future of Life Institute, and the Army Research Office (through its Defense University Research Instrumentation Program).

Abstract of the paper:

Hundreds of dams have been proposed throughout the Amazon basin, one of the world’s largest untapped hydropower frontiers. While hydropower is a potentially clean source of renewable energy, some projects produce high greenhouse gas (GHG) emissions per unit electricity generated (carbon intensity). Here we show how carbon intensities of proposed Amazon upland dams (median = 39 kg CO2eq MWh−1, 100-year horizon) are often comparable with solar and wind energy, whereas some lowland dams (median = 133 kg CO2eq MWh−1) may exceed carbon intensities of fossil-fuel power plants. Based on 158 existing and 351 proposed dams, we present a multi-objective optimization framework showing that low-carbon expansion of Amazon hydropower relies on strategic planning, which is generally linked to placing dams in higher elevations and smaller streams. Ultimately, basin-scale dam planning that considers GHG emissions along with social and ecological externalities will be decisive for sustainable energy development where new hydropower is contemplated.