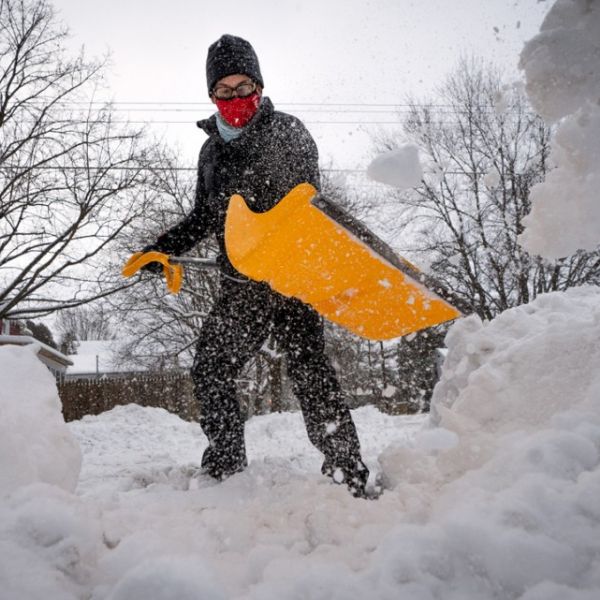 In early 2019, Dan Cogan, M.S. ’95, chief of staff for the city of Ithaca, was looking for a way to enlist help in rectifying a potentially dangerous public nuisance: snow-covered sidewalks and curb cuts at downtown intersections.

These areas can often go untended and present a hazard to pedestrians. Cogan’s idea: a mobile app that people could use to volunteer their snow-shoveling services around the city – and engage in friendly competition at the same time.

Nearly two years later, “Snow Angels” has arrived. The web-based app, developed by Cornell computer science students working with city software engineers, launched on Jan. 28. And at least one city resident has already begun racking up points with his shovel.

Cogan said he was inspired by the Citi Bike “Bike Angels” program, based on Cornell research, in which cyclists in New York City cyclists earn points adding up to free rides and other prizes by using or returning bikes at certain high-need stations.

To help with developing the snow-shoveling app, Cogan called on the Cornell Office of Community Relations, which connected him with William Y. Arms, professor emeritus of computer science and instructor of CS 5150 (Software Engineering).

“By great good fortune, (Cogan’s) message reached me at the beginning of the semester, just at the time when we looking for projects,” Arms said. “We had never worked with the city before, but everything went very smoothly.”

The project’s student team lead, Avinash Thangali ’19, said he and his seven project mates enjoyed “gamifying something that’s normally not very fun” as a way of helping in the community.

“It shifts the focus from outcome to process,” he said. “Especially for kids, telling them to shovel snow to further some abstract public good probably isn’t very motivating. But if you make the process itself fun with some kind of reward like points, leaderboard position, etc., then I think you’re more likely to get them excited about it.”

“A very talented group of students signed on to the project and took it from idea to working prototype, and came up with the Snow Angels name,” Cogan said. “City staff picked it up from there, but we were able to use a lot of the work from the students.”

The team received technical assistance from city of Ithaca councilmember Ducson Nguyen, who’s also a software engineer for the city, as well as Melanie Bruce, senior geographic information system specialist for the city. They deserve “much of the credit for the work that was done,” Arms said.

Due to snags in development, the app is web-based and not available as a download from Apple or Google Play, but “it still relies on the back-end software and the basic structure that the students developed,” Cogan said.

How it works: Navigate to the Ithaca Snow Angels web app (allow “locations” in your browser.) The program relies on reporters as well as shovelers, so anyone can contribute.

To report a corner in need of clearing, find the area on the map, click “Request a Snow Angel,” and take a photo of the spot. The corner will be flagged with a red pin and listed as being in need of a Snow Angel.

People looking to help out with shoveling will receive an alert; reporters can also clear areas themselves. After the job is done, the shoveler snaps a shot of the cleared area for approval and earns points toward being named “best shoveler in Ithaca.”

As of Feb. 1, one user – Matt Braun, a resident of the Fall Creek neighborhood of Ithaca – had racked up 25 points on the app.

“This is a great example of a town-gown partnership that is intended to serve the local community,” said Braun, who’s also a staff member at the College of Veterinary Medicine. “I appreciate the intent behind this innovation – finding a way to help our neighbors and make Ithaca a more livable place for all, especially when a snowfall can make it challenging for some.

“And it’s so good for our collective spirit to get out there and find ways to help,” he said. “We need as many reasons as possible, now more than ever, to keep it positive.”

This story, written by Tom Fleischman, originally appeared at the Cornell Chronicle on February 3, 2021.