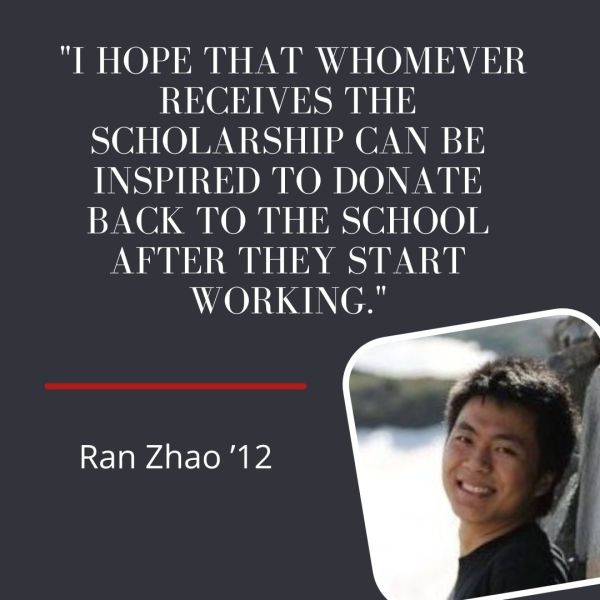 As part of Cornell’s To Do the Greatest Good campaign, the university launched an initiative to make a Cornell education even more affordable for talented students from all socioeconomic backgrounds.

Ran (Andy) Zhao ’12 established a scholarship for students in the Cornell Ann S. Bowers College of Computing and Information Science with a gift of $150,000. The scholarship will receive an additional $50,000 from his company and an additional $100,000 from university matching funds, effectively doubling the impact of the donation. Andy’s gift was the first to utilize the affordability matching challenge within Cornell Bowers CIS, and he says the challenge inspired him to increase the amount he pledged.

“Even without the match, I would have made a commitment to establish the scholarship. But the matching program encouraged me to put a little extra money into the scholarship up front, which is something I might not have done right away,” he says.

Andy received financial aid as an undergraduate student at Cornell, and he was able to meet the donors behind one of the scholarships he received. That meeting, he says, was “a really memorable experience,” solidifying his decision to give back to Cornell as soon as he started working. Andy hopes to inspire future Cornell engineering and computer science students to pay it forward in the same way, encouraging a culture of philanthropy.

“I hope that whomever receives the scholarship can be inspired to donate back to the school after they start working,” he says, “not as an obligation—but as a really feel-good thing to do.”

He encourages other recent graduates to give what they can, sharing from his own experience that giving through appreciated company stocks can be a tax-efficient way for some younger alumni to make bigger contributions earlier in their careers. “The earlier you donate, the earlier you can start to feel like ‘Hey, I’m making an impact!’ That’s a good feeling to have,” he says.

Now a senior software engineer at Google, Andy shares that his Cornell experience has had an impact on his life in many positive ways. The classes he took crossed disciplines and helped him develop a strong understanding of finance, business, and investments. He notes that the professors in his major of computer science were “all amazing people” who helped him succeed.

Andy plans to continue supporting the university financially whenever he is able, and says supporting Cornell instills in him the feeling that his gifts can help “do good for society.”

The university has committed $50 million to match undergraduate affordability endowment gifts of at least $250,000, or gifts of $150,000 or more from alumni who have graduated in the last 20 years. Gifts that meet these criteria will be matched at a 1:2 ratio ($1 match for every $2 given), increasing the impact of each gift and directing more funds to support undergraduate students.

Read more about the other donors who have already made gifts as part of this opportunity, establishing scholarships that will make a significant and lasting difference for Cornell students.