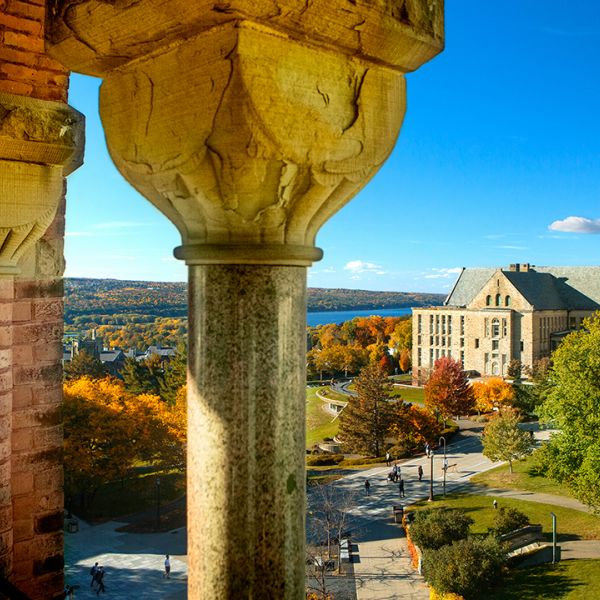 Cornell is launching a bold new initiative in artificial intelligence that will expand faculty working both in core areas, as well as the nearly unlimited domains affected by advances in AI.

The initiative, a new Radical Collaboration laid out by AI scholars from across the university, seeks to advance Cornell’s reputation as a leader in AI research, and encompasses AI development, education and ethics. It will deepen universitywide collaborations in AI’s development, application and implications across related and AI-influenced fields.

“We want to build a community around AI because we believe strong collaborations across the university are going to be incredibly valuable over the next decade of development in this space,” said Kavita Bala, dean of the Cornell Ann S. Bowers College of Computing and Information Science and the initiative’s lead dean, at a Cornell faculty AI Town Hall held virtually on Nov. 22.

Bala, together with Greg Morrisett, the Jack and Rilla Neafsey Dean and Vice Provost of Cornell Tech; Lynden Archer, the Joseph Silbert Dean of Engineering; and Ray Jayawardhana, the Harold Tanner Dean of the College of Arts and Sciences; as well as other initiative leaders, revealed details of the group’s organizational work and vision-building that were crafted over the last several months. More than 100 Cornell faculty, representing 11 colleges and university units, attended the virtual town hall.

Artificial intelligence, a broad and booming subfield of computer science that includes machine learning, computer vision and natural language processing, is transforming the world – from enterprise and society to our everyday lives. Globally, AI represents a new frontier in technological innovation, and the U.S. intends to be a trailblazer: through its Innovation and Competition Act of 2021, the U.S. will commit $250 billion in new AI research and development initiatives over the next five years.

Citing Cornell’s existing strength in AI – from machine learning and core AI to areas such as cognitive science, behavioral science, robotics, optimization, medicine and sustainability, Bala said the university is well-positioned to lead the development and refinement of AI by leveraging its broad interdisciplinary collaborations.

The Radical Collaboration initiative was launched by the Office of the Provost in 2016 to jumpstart interdisciplinary research partnerships across Cornell.

“If recent trends are any guide, the intersection of AI and engineering will have lasting impacts across all College of Engineering disciplines,” Archer said. “Collaboration is one of our distinguishing strengths at Cornell, and this collaboration is exciting because it offers an opportunity to define these intersections in ways that add the greatest value for our students."

“The College of Arts and Sciences – with faculty expertise spanning a wide range of disciplines – has a lot to bring to the table and also a lot to build upon as part of the AI radical collaboration,” Jayawardhana said. “From philosophy to physics, and from neuroscience to public policy, our scholars are engaged in not only shaping, investigating and utilizing AI, but also considering its profound ramifications.”

At Cornell, AI has been a central focus and key strength, Morrisett said.

“A lot of what we’re going to be focusing on here in New York are the translational applications of AI to important strategic sectors,” like healthcare and medicine, he said. In addition, Cornell Tech’s newly established Urban Tech Hub – based in the Jacobs Technion-Cornell Institute – and the Tech, Media and Democracy initiative are two other areas where AI can play critical roles, he said.

Cornell is uniquely positioned to lead in what Thorsten Joachims, professor of computer science and information science, called “human-engaged AI,” in which AI systems are developed and designed to sustainably serve humans and humanity.

“We need to think about AI not just in terms of accuracy but in terms of usability, fairness, accountability, and transparency,” said Joachims, who chairs the initiative’s subcommittee on research vision. “The vision we have is one of breadth, where we draw on the broad expertise at Cornell and bring that to bear on AI.”

“There’s a great opportunity for Cornell to define what AI education would look like,” said Kilian Weinberger, professor of computer science and initiative co-chair. “We should move swiftly, but most importantly, we should do it right.”

Recent interdisciplinary collaborations across the Ithaca campus, Cornell Tech and Weill Cornell Medicine have leveraged AI to inform varied issues from sustainable agriculture and urban design to cancer detection and precision behavioral health. Elsewhere, Cornell scholars are developing the technology to improve autonomous vehicles, parse quantum matter, and are leading the conversation on questions of ethics, law and fairness in AI.

Responding to an audience comment emphasizing the need for education around ethics in AI, Jon Kleinberg, the Tisch University Professor of Computer Science and Information Science, pointed to Choices and Consequences in Computing (CS 1340), a class he co-teaches with Karen Levy, assistant professor in information science, that attracted 500 students when it was first offered last spring. For the Spring 2022 offering, nearly 600 students from 40 different majors are currently pre-enrolled, Kleinberg said.

Many Cornell graduates now work for some of tech’s biggest companies, in roles aimed at responsible computing, auditing platforms for bias and discrimination, and investigating strategies to mitigate the polarizing effects on the political process, he said.

“Even within these companies, there has been a fairly rapid realization over the past five years that their mandate is much broader,” he said. “They need to be hiring people who are compatible with that.”

“The transformative opportunities of AI are vast, but they also come with great challenges,” she said.

“Cornell is already a leader in AI and is home to world-renowned scholars inside and outside of AI. This unique combination is going to be essential in guiding AI’s development, impact and broad adoption in the future.”

Louis DiPietro is a writer in the Cornell Ann S. Bowers College of Computing and Information Science.