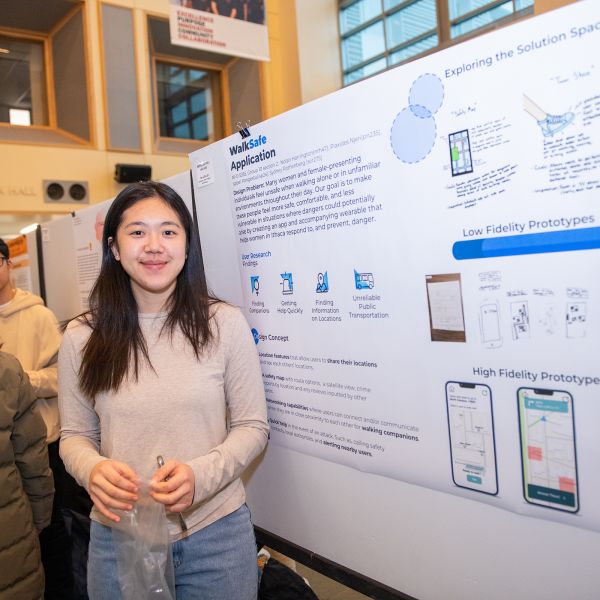 The familiar notes of the Cornell Alma Mater rang through a busy Duffield Hall atrium on Tuesday, December 6, but the source was not the customary afternoon toll from the Cornell Chimes atop McGraw Tower.

It was Sam Meisner ’24 at the keys of his team’s “Piano Painter,” a combination keyboard and musical note visualizer and one of nearly 100 semester-end projects featured in a massive student showcase from five information science courses.

Stretching throughout the atrium, the showcase featured gadgets like the Piano Painter – created for INFO 4320, Introduction to Rapid Prototyping and Physical Computing – freshly designed apps, research posters, and much more.

Here’s a sampling of some of the projects:

Students in INFO 4320 are schooled in modern prototyping techniques like laser cutting, 3D printing, and microcontroller programming. Semester-end gizmos developed for this course never lack for creativity and fun, from automated drink makers and cookie icers, to innovative musical instruments and Lego sorters.

Of note this semester, the Candy Launcher – designed by Lanyue Fang, Chelsea Frisch, Elliot Kann, and Saif Mahmud – combines computer vision with a mechanism that rotates and launches M&Ms. When the system’s corresponding camera detects a human participant, the system turns the candy launcher in the opposite direction and fires away. The intent is to engage the user in a game of catch-the-M&M.

Students in INFO 4500 examine how new communication technologies affect the way we produce and understand language and modify interaction with one another. 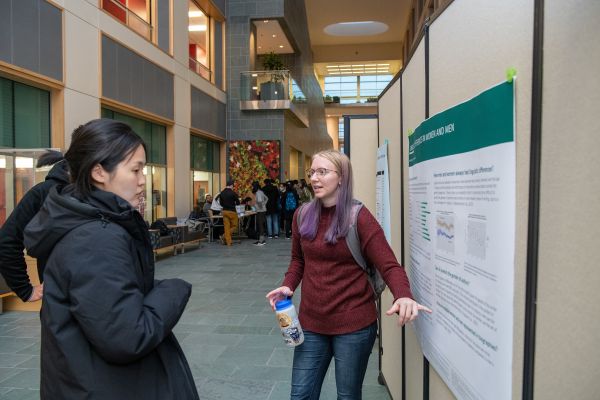 CAPTION: Julia Atkins, a student in the master of professional studies (MPS) program in information science, pitches her survey of existing research on linguistic differences in communication between women and men during a student showcase held Dec. 6 in

Julia Atkins, a student in the master of professional studies (MPS) program in information science, surveyed existing research on the linguistic differences in communication and verbal skills between women and men. Among several notable findings, Atkins learned that, in literature, female writers exhibit greater usage of an “involved” style, as opposed to male writers who adopt a more “informational” style, and while both women and men similarly express hard emotions such as anger or fear, there is a significant difference in expressing soft emotions like joy or sadness.

Sumi Xu and Jade Zhang, both students with a UX design focus in the MPS program in information science, comprised one team that targeted novice gardens with a fresh website and responsive mobile version.

A big challenge, Xu said, was “matching the final design with the initial wireframes. There were some technical issues, and we couldn’t achieve 100 percent of the original design. But we had to make adjustments and still deliver a prototype that achieves user goals.”

HCI Design challenges students to consider all phases of the human-centered design process, from user needs and possible design solutions to address those needs, to creating prototypes and evaluating their usability.

“Compared to my other classes that are very exam-based, in this class you’re working toward an end product rather than taking a final,” she said. “I was learning things and implementing my knowledge by creating this prototype. Coming up with concepts with group members to create a prototype, there’s a lot of self-satisfaction.”

In this course, students learn at the intersection of the behavioral foundations of communication technology and the information sciences.

A Cornell research team that explores privacy in immersive virtual reality would be an example of work that resides in this space. The team – whose members are Jose Guridi, Yeonju Jang, Rachel Kwon, Daniel Molitor, and Sneha Nagarajan – presented their poster, called “Are You Anonymous? Identifying Personal Information from Nonverbal Behaviors in Immersive Virtual Reality” as part of the information science showcase.

The team set out to determine whether or not humans participating in VR are able to glean any personal information about another user – like gender, age, or ethnicity – based on that person’s behaviors in VR. The answer, according to the team’s findings, is no.

Existing research shows that out of a pool of more than 500 participants, a simple machine learning model can identify 95% of users correctly when trained on less than five minutes of VR tracking data per person.

“The literature says machine learning can identify users based on tracking data, but can humans do it?” said Jose Guridi, a doctoral student in the field of information science. “And what we found, at least in this setting, we can’t do it.” 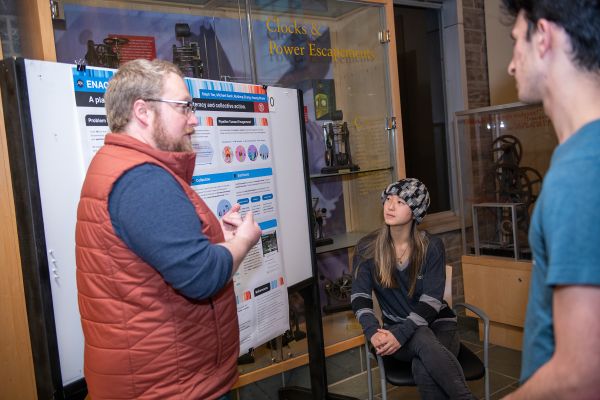 To address these factors, the team designed the Enact platform to: empower climate change literacy by improving clarity and accessibility of public information; foster community engagement by facilitating the organization of events and volunteer services; and reduce cognitive effort required by individuals to influence political change.

“Encouraging people to engage with community was a really big thing. We learned that’s a huge part in sustaining political action on the platform,” said Sack, a doctoral student in the field of information science. “The collective impact of voting and environmental literacy in general is most meaningful.”