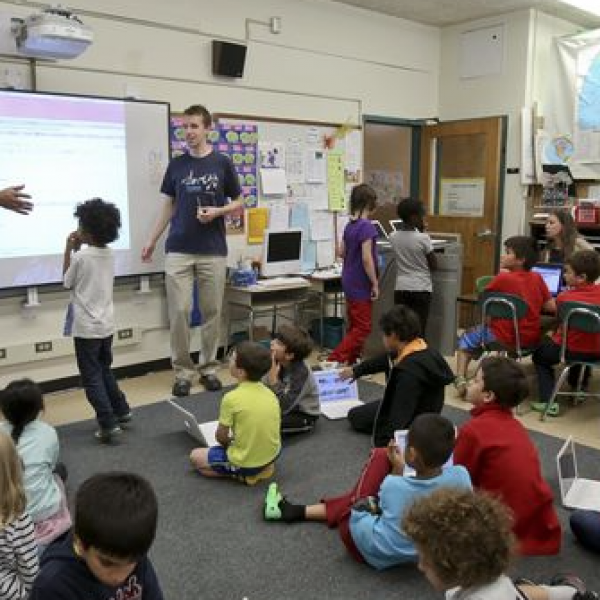 A roomful of second- and third-graders could barely sit still at Belle Sherman Elementary School as they waited for their after-school class to begin.

"How many of you know what an algorithm is?" Cornell University CS MEng graduate Arjan Nirh asked the group.

Nirh and Cornell Ph.D. student Nikolai Rakhilin were met with similar responses as they asked about looping and debugging a code.

The pupils, as well as another group from kindergarten and first grade, have been spending an hour each week learning the basics of coding and working to the point where, on Tuesday, they were adding finishing touches to computer games they had created.

"There's a big push to get kids involved at an early stage," Nirh said. "Because everyone is using computers all the time, using iPhones and whatnot, you need to know a little bit about programming."

Called "Code-4-Kids," the program is a collaboration between Belle Sherman teachers, Cornell computer science students and the Triad Foundation to give children the opportunity to learn computer literacy and algorithmic thinking.

The program was a hit, school Principal Dan Breiman said. Fifty students signed up, and there were many more on the waiting list.

Rakhilin and Nirh had no idea how quickly the students would learn. They ended up skipping many exercises on the website Code.org they use for lessons.

"We could never keep up with how quickly the kids were picking this stuff up," Rakhilin said.

Rakhilin learned to code later than he would have liked. He said he wished he had the opportunity to learn the skills earlier in middle or high school.

"I thought it would be a good way to help the next generation learn earlier," Rakhilin said. "If you don't have the opportunity, you never get into this world, and it kind of flies by you."

Next week the children will show off their games and progress to their parents and the superintendent. Rakhilin said he hopes the program will continue and grow next year.