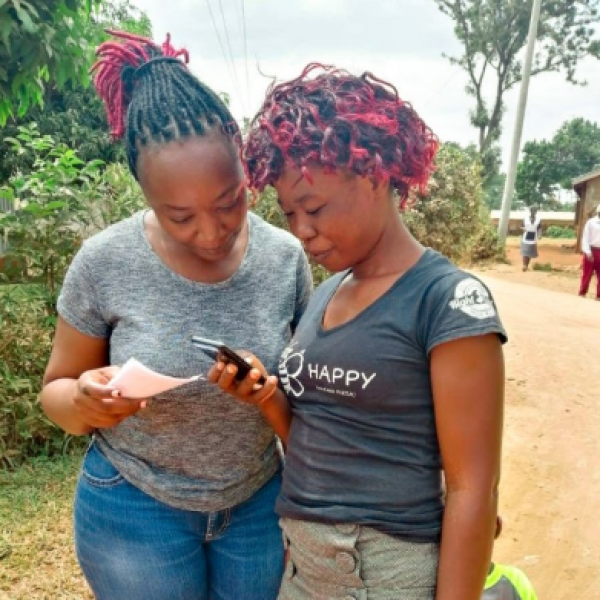 Some problems are best solved with new tech or a flashy app. But sometimes adapting existing technology works best of all.

A new system developed by Cornell Tech researchers will allow thousands of patients of community health care workers in rural Africa to use a basic tool on their mobile phones – one that doesn’t even require an internet connection – to provide feedback on their care anonymously, easily and inexpensively.

“Technological interventions, when designed in the right way, can help address some of the complex health problems we have in the world,” said Fabian Okeke, doctoral student in information science at Cornell Tech and first author of “Including the Voice of Health Care Recipients in Community Health Feedback Loops in Rural Kenya,” presented at the Association for Computing Machinery Conference on Computer-Supported Cooperative Work and Social Computing, Nov. 9-13 in Austin, Texas.

The system showed promising results in a recent study and will soon be expanded by Medic Mobile, a nonprofit health tech company that collaborated on the research and works with more than 20,000 health care workers across 14 African countries.

In remote areas in Africa and India, where a single doctor might serve 10,000 people, many rely on community health care workers, who visit their homes and act as intermediaries between doctors and care recipients. While this model is considered effective and has been adopted around the world, there have been cases of mistreatment. A 2016 study found that 70% of women who gave birth at a referral hospital in Tanzania experienced one form of abuse or disrespect.

Until now, efforts to improve care and accountability have focused on collecting data from caregivers. In this study, the researchers sought to create a system allowing care recipients to offer feedback of their own.

“If you’re providing services for a pregnant mother in rural Kenya, how is the pregnant mother going to say whether the service is helping her?” Okeke said. “We wanted to somehow bridge this gap – not just in the research literature but in community health. So we started thinking about ways to integrate the voices of care recipients and to do it in a way that is scalable.”

The researchers chose an unstructured supplementary service data (USSD) system – commonly used by owners of prepaid mobile phones to check their balances. They chose USSD because it offered anonymity, unlike short message service texting; and because it is far less expensive than a call-based system.

With USSD, users enter a series of numbers into their phones, prompting questions about their experiences at the health care centers. Since most Kenyans already own mobile phones and are familiar with USSD, it was easy for them to adopt, the researchers said.

“Often when people think about interventions in developing nations, they think, ‘Let’s go build an app from scratch or a completely new tool,’ but many times you can go back and tap into existing infrastructures,” Okeke said. “People are already used to placing calls and texting – I think the innovation here is that you can go back to those mundane technologies and transform them into something else.”

The researchers deployed the tool for seven weeks, training five care workers who, in turn, trained care recipients. For example, users who were visited by health care workers could dial *384*888# on their phones to provide feedback, which took less than two minutes. Users who visited community health care centers could dial a different series of numbers to offer feedback.

Users dialed in to answer a series of questions 495 times, with an error rate of less than 1%. Around 70% of the responses were positive, 17% negative and 13% neutral.

The researchers also conducted focus groups with patients and caregivers to gauge their opinions.

“We found that people were pretty enthusiastic about using USSD for providing feedback,” Okeke said. “It was a way to empower them to communicate how they felt about the services they received.”

Even the health care workers – who at first feared the feedback could be used maliciously against them – seemed pleased with the results, the researchers found.

“Initially, when we started the design process, health workers said this could be a tool that becomes a punishment,” Okeke said. “But most of the feedback was positive, so it’s validating the hard work that they’re doing, but it’s also holding them accountable. We heard things from care workers like, ‘Now it’s on me to combine both the positive and the negative to understand where I can improve my services.’”

Medic Mobile is in the process of incorporating the USSD system into its software toolkit, which is used by health care organizations across Africa. “The potential impact is thrilling,” Okeke said.

The research was partly funded by the Children’s Investment Fund Foundation UK.

--Provided by the Cornell Chronicle