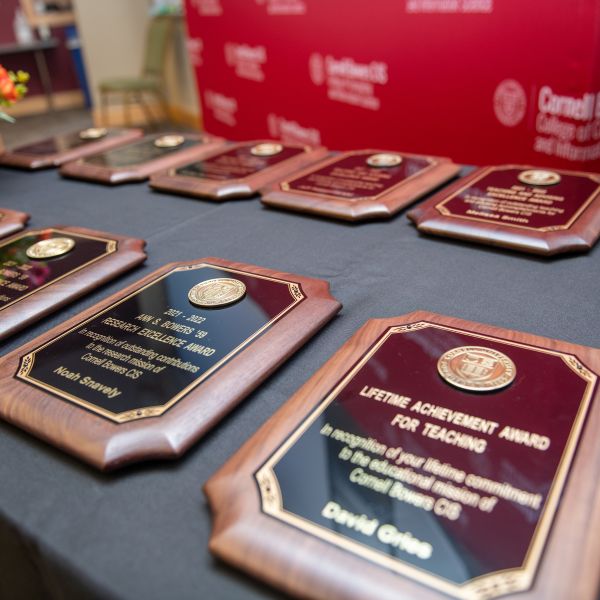 Among the ten honored for the 2021-2022 academic year, David Gries, retiring professor of computer science, was named recipient of the college’s first Lifetime Achievement Award in Teaching for his 51 years as an educator in Cornell’s Department of Computer Science.

“What stands out to me about David is his deep commitment to educating future generations,” said Kavita Bala, dean of Cornell Bowers CIS, during a reception for award winners held Friday, May 13 in Cornell’s Statler Hall. “He inspires his fellow faculty members, all of us here, to be the best educators and mentors we can be.” 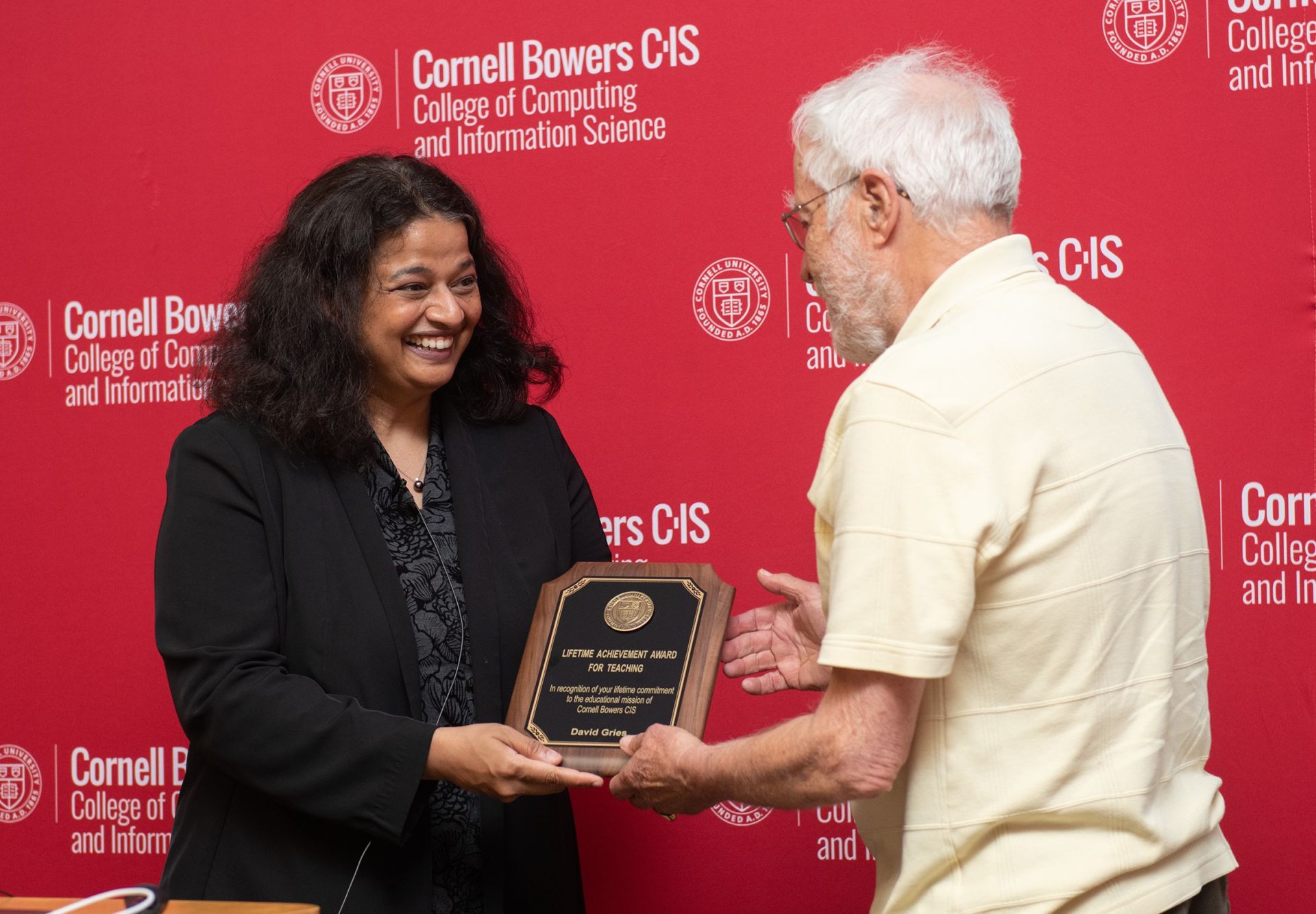 Dean Kavita Bala presents David Gries with the Lifetime Achievement Award in Teaching for his 51 years as an educator in Cornell’s Department of Computer Science.

Joining Cornell’s Department of Computer Science in 1969, Gries became a world-renowned leader in computer programming. He’s the author of four books, including “The Science of Programming,” a seminal text published in 1981 that elevated program design and analysis to a science and became required reading for any serious computer programmer. Among many other honors and awards, his 1974 paper, “What Should We Teach in an Introductory Programming Course,” was named one of the top 10 computer science education research papers of the past 50 years by the Special Interest Group on Computer Science Education (SIGCSE) in 2019.

This semester, Gries also received the 2022 Tau Beta Pi Professor of the Year Award from the Cornell Engineering Alumni Association. On Tuesday, May 10, in front of more than 700 students and colleagues, Gries offered his final lecture in Object-Oriented Programming and Data Structures (CS 2110) in Statler Auditorium.

Along with Gries, nine other faculty members were honored for excellence in one of two categories: research, and teaching and advising.

Recipients of Research Excellence Awards were honored for key research contributions and their reputation in and impact on their respective fields.

Karen Levy is an assistant professor of information science and associate member of the faculty of Cornell Law School. Levy’s analyses weave together how technology and the law interact, possibly subverting legal practice through data and technology, for instance where ridesharing platforms can use discriminatory ratings by riders in their evaluation without legal recourse. She’s been widely published in conferences, law and policy journals, sociology journals, and her editorials have appeared in popular press, including The New York Times and the Washington Post.

David Matteson is associate department chair and associate professor in statistics and data science. Director of the PRISM Institute for Trans-domain System Risk and co-director of TRIPODS Greater Data Science Cooperative Institute, Matteson’s research centers on modeling complex processes – ranging from linking risk measures across human and natural domains, to understanding atomic-level dynamics in material science. He was recently selected as the next director of the National Institute of Statistical Sciences, which he was instrumental in bringing to Cornell.

Noah Snavely is a professor of computer science based at Cornell Tech and a world-leader in computer vision, specifically in gaining novel insights and models of the world from large collections of images and video. His work opened the field’s eyes to what massive online photo collections can reveal about the world when paired with the right algorithms and techniques, Joachims said. This ranges from analyzing local trends in clothing and fashion across the world, to constructing 3D models of cities.

Anil Damle is an assistant professor of computer science. Damle’s research areas include numerical linear algebra, computational quantum chemistry, and computational statistics. He is credited with transforming Computational Mathematics for Computer Science (CS 3220), a course covering probability, optimization, and numerical linear algebra, all of which are needed in numerical analysis and in other computer science areas including robotics, graphics, and machine learning. He also teaches Numerical Analysis: Linear and Nonlinear Programs (CS 4220), a senior-level numerical analysis course, and last fall, he co-taught Introduction to Machine Learning (CS 4780/5780) with Kilian Weinberger.

Kyle Harms is a lecturer of information science and leads two large, web-design courses – Introductory Design and Programming for the Web (INFO/CS 1300) and Intermediate Design and Programming for the Web (INFO/CS 2300). These courses are considered difficult to teach because students enter with diverse backgrounds and are tasked with learning both technical programming concepts and usability and user-centered design. Students were particularly impressed with the organization of INFO 1300 during COVID semesters in 2020 and 2021. Harms also leads App Design and Prototyping (INFO 4340/5440).

Curran Muhlberger is a lecturer of computer science. He was formerly a software engineer at SpaceX. His courses include Object-Oriented Programming and Data Structures (CS 2110) and Introduction to Computing Using MATLAB (CS 1112), a course he twice co-taught with Daisy Fan. “Curran didn’t just teach,” Fan said. “He motivated each topic at the beginning of every lecture using a mix of engineering/scientific applications and anecdotes from his experience in software engineering.” Muhlberger is credited with his expert handling of CS 1112 during COVID semesters, organizing fun, optional activities to encourage interaction among students and course staff.

Jeff Rzeszotarski is an assistant professor of information science whose primary research interest is in helping experts and novices alike make sense of data. He teaches Information Science’s large data visualization course, Data-driven Web Applications (INFO 3300), which includes a masters-level course that co-meets with it (INFO 5100). In spite of the course’s large class size – between 200 and 300 students each semester, Rzeszotarksi’s teaching effectiveness scores from students land at 4.5 or higher out of 5. Students praise his overall knowledge of the area, the balance of his coverage between technical and social aspects of the field, and his exacting care in lecture and assignment design.

Melissa Smith is a senior lecturer of statistics and data science. She is a statistician who leads Introductory Statistics for Biology (STSCI 2150), and has earned a reputation among students for her energetic and animated lecture style. Her teaching effectiveness score from students was the highest score by any Cornell Bowers CIS instructor for Fall 2021. She is credited with creating a dynamic learning environment and incorporating numerous in-class experiments to demonstrate technical concepts like multiple linear regression. Smith “makes statistics… into an interactive and fun subject,” wrote one student reviewer. On top of teaching at Cornell, Smith has also been actively teaching in the Ithaca community, including leading Boynton Middle School’s math club for 10 years.

Louis DiPietro is a writer for the Ann S. Bowers College of Computing and Information Science.