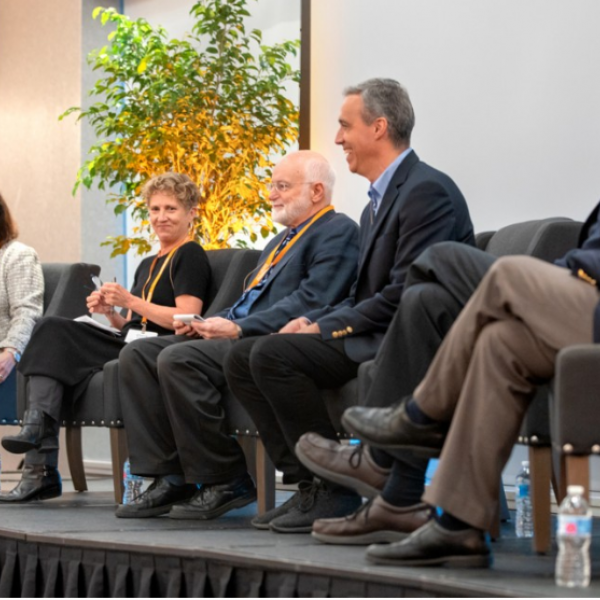 When the Faculty of Computing and Information Science (CIS) was first proposed, 300 faculty members packed a meeting to voice concerns. Engineering professors opposed removing computer science from their college. Every department chair in the College of Arts and Sciences signed a letter warning of terrible consequences.

“The vision was really smart and sharp and forward looking. The only problem was it stepped on some people’s toes, like any other change in structure,” said Hunter R. Rawlings III, Cornell president emeritus and professor emeritus of classics, who spoke at the “Creating CIS: Fireside Chat” panel Oct. 2 in the Statler Ballroom.

Despite opposition, Cornell followed through with its plan to create CIS, an innovative unit now including computer science, information science, statistics and data science. Twenty years later, 1 in 10 students on the Ithaca campus major in one of these fields and the unit fosters countless collaborations across disciplines.

After the panel, a domino fall created by engineering student Christopher Wright ’20 – and toppled by a robot.

On the Oct. 2 panel, Rawlings was joined by Claire Cardie, professor in CIS and founding chair of the Department of Information Science; Robert Constable, professor of computer science and founding dean of CIS; Dan Huttenlocher, former dean of CIS and Cornell Tech and now dean of the Massachusetts Institute of Technology Schwarzman College of Computing; and Greg Morrisett, the Jack and Rilla Neafsey Dean and Vice Provost of Cornell Tech and former dean of CIS.

The speakers discussed the societal changes they foresaw at the time – as well as those they didn’t see coming.

“Something that really struck me was the degree to which we were real techno-optimists,” Huttenlocher said. “Today, I hope most of us are more techno-realists than techno-optimists; that is, seeing both the extremely positive things that can come out of technological change, but also the real dangers of technological change. And that was remarkably absent from the report at the time.”

But even if they didn’t foresee technology’s pitfalls, CIS’s structure enables it to address those challenges.

“Having CS and IS not just in the same university but the same building, talking to each other, working with each other, is really signature to Cornell,” Morrisett said. The internet’s impact on democracy, the rise of automation and the erosion of privacy are among the pressing issues created by tech that must be reckoned with, he said.

“It’s the techno-optimist view, I still think, that drives a lot of things, and I’m still an optimist in all of these regards, but balancing that out is really important,” he said.

The goal of creating a standalone CIS unit was to encourage collaborations, with the vision that computer science would transform every discipline. Today, 1,600 undergraduates are CIS majors, and research including CIS faculty ranges from medicine to sustainability to the humanities.

Computing and information science, as well as statistics, applied math and related fields are “enabling disciplines,” Morrisett said – “Almost like magic fairy dust you can sprinkle on other disciplines and then new things blossom.”

“I was experiencing day to day a lot of hostility and anger from people across campus about the new change,” Cardie said.

Constable credited Rawlings with inspiring him to come up with a one-line vision statement that evoked Cornell’s founding principle: “In the great American universities of the 21st century it must be possible for any student to bring to bear on any subject the ideas and technology of computer science.”

“And that phrase worked,” Constable said. “It started to give people a broader vision, that maybe this was really going to be good for Cornell, for the undergraduates, for the whole institution.”

Asked by an audience member how CIS might tackle technology’s challenges over the next 20 years, Rawlings invoked Plato.

When Plato considered the book, a new technology in his time, Rawlings said he saw two problems: It would weaken the Greeks’ memories, and it couldn’t communicate with readers. To help solve the second problem, Plato wrote his own books as dialogues, essentially providing books with voices and giving readers the tools to find their own way to the truth.

“To me, this is the perfect story about a paradigm shift – because it says, ooh, this has some real problems, and… [technology has] big, nasty problems,” Rawlings said. “But Plato figured out a way, intrinsically, internally, to solve the problem of the book. So I hope you all will go and become modern-day Platos.”

The events were livestreamed and recorded here.