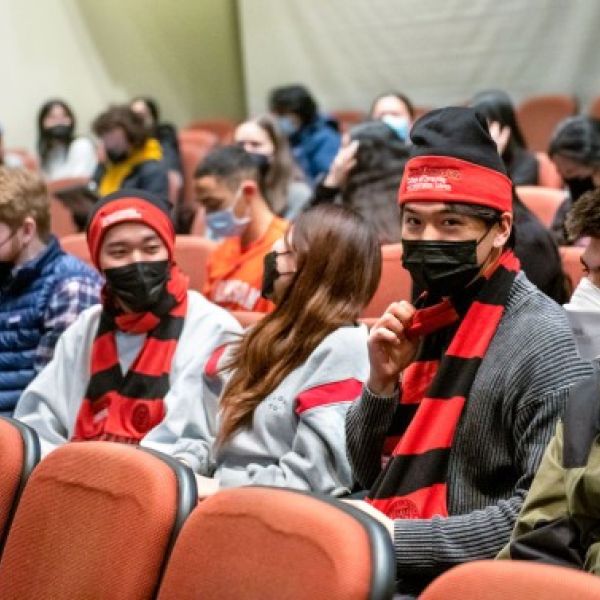 By Louis DiPietro for the Cornell Chronicle

For the first time in its 23-year history, the Cornell Ann S. Bowers College of Computing and Information Science has more than 2,000 undergraduate majors within its three departments – the latest milestone amid a sixfold growth in enrollment over the last decade.

“Everything is frontier,” said Larry Blume, professor of information science and the Charles F. and Barbara D. Weiss Director of Undergraduate Studies in Cornell Bowers CIS, in response to a student’s question at the college’s first New Majors Welcome, held Feb. 18 in Statler Auditorium. “All areas are hot.”

From artificial intelligence, data science and robotics to digital agriculture, security and cryptocurrency, areas of learning and expertise within Cornell Bowers CIS are immense and interdisciplinary, according to faculty panelists at the New Majors Welcome, supercharging nearly every field of inquiry.

At the event, around half of the 400 undergraduates recently affiliated with Cornell Bowers CIS heard from college leadership, faculty, advising staff and leaders of student groups on how to make the most of their undergraduate studies.

Today, 76% of all Cornell undergraduates take at least one class in Cornell Bowers CIS, which comprises the departments of information science, computer science, and statistics and data science.

David Lu ’24, a biology major, began to recognize the increasingly vital role of statistics in his studies, and it motivated him to add a second major in statistical science.

“Exploring both of these paths for the purpose of improving health care is really something that is meaningful and that I can develop here,” he said. “Statistics makes me think in different ways. It requires an open way of thinking; it forces my creativity to come out.”

Parth Vakil ’24 was drawn to computer science because of its relevance and interdisciplinary nature.

“I’m not sure exactly what I want to go into, but I feel CS is applicable to any field,” said Vakil, whose initial interests lie in software engineering, blockchain technology and cryptocurrency. “It’s pretty versatile, so I thought it’d be a good choice.”

In addressing new majors, Bala emphasized Cornell Bowers CIS’ academic leaders and their deep commitment to providing world-class education to the “thinkers, doers and leaders of tomorrow.” She encouraged students to take advantage of the college’s deep brain trust and pursue opportunities for experiential learning and research projects.

Two years ago, Asriev had no idea what natural language processing (NLP) was, but an introductory course led by an NLP pioneer sparked his interest in this subfield of computing and information science that applies computational methods to linguistic analysis and human language.

This semester, as a new computer science major drawing on a deep background in linguistics – he’s currently learning his fourth language – Asriev will collaborate on a research project with that instructor, Claire Cardie, the Joseph C. Ford Professor of Engineering in the departments of computer science and information science, and the college’s associate dean for education.

Louis DiPietro is a writer in the Cornell Ann S. Bowers CIS College of Computing and Information Science.