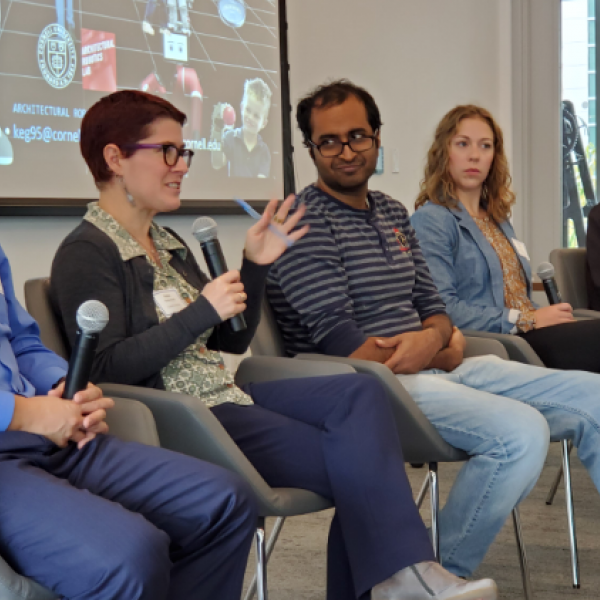 It’s a messy world out there, the complexities of which present a number of opportunities and challenges for the robots playing an increasingly prominent role in everyday life. Cornell faculty and students joined industry researchers to discuss the present and future of robotics during the full-day workshop “Embracing the Messy World: Robotics at Cornell,” hosted in Upson Hall on Nov. 8.

“The impact that kind of technology will have on society is truly profound. The disruption of transportation that happened 100 years ago is now going to change us just the way as when horses went away and cars came in. We’re actually at that threshold,” said Bala.

Presentations and panel discussions explored how robotics is changing transportation, agriculture, manufacturing, and private life. The workshop was also an opportunity for Cornell to showcase its prestigious robotics program through research overviews, laboratory tours and demonstrations.

During his remarks, David Erickson, director of the Sibley School of Mechanical and Aerospace Engineering, described robotics at Cornell as growing in sophistication.

“Robotics is really the kind of initiative and program that exemplifies what we do at Cornell. It crosses at least five departments, at least two colleges, and now at least two campuses,” said Erickson, referring to Cornell Tech. “We’ve always had very strong educational research initiatives, but what’s happened is now we’ve formalized a lot of those things.”

Hadas Kress-Gazit, associate professor in the Sibley School and director of the Verifiable Robotics Research Group, noted Cornell’s new robotics minor and soon-to-launch robotics doctoral program, pointing to some of the unique strengths of robotics at Cornell.

“We have a lot of expertise in autonomy, in design, and in interaction – human-robot integration, robot-robot interaction, those kinds of systems – but what is very unique here is actually the connections between those,” said Kress-Gazit. “It’s not that someone does autonomy and that’s it. We have a lot of collaborations between labs and within labs around these areas.”

Industry engineers from Boeing, Facebook, Fetch Robotics, Honda, Microsoft, Moog and Toyota joined the workshop. Anirudh Badam, principal research scientist at Microsoft, presented his work with agricultural drones and said the workshop was an opportunity to meet some of the faculty and students his company has been collaborating with.

“And I thought this would be the right place to learn from others on what they’re doing in the space of digital agriculture,” said Badam, who added he also enjoyed learning more about Cornell. “The first session gave me a sense of how broad the robotics program is, from physical to digital systems, and the panelists talked about things that are important for society including implications for robotics, I really like that perspective.”

Erickson said he was pleased to have so much participation from industry at the workshop.

“Industry brings that level of robustness to what we do,” said Erickson, “to ensure the activities we pursue can really have impact outside the university.”