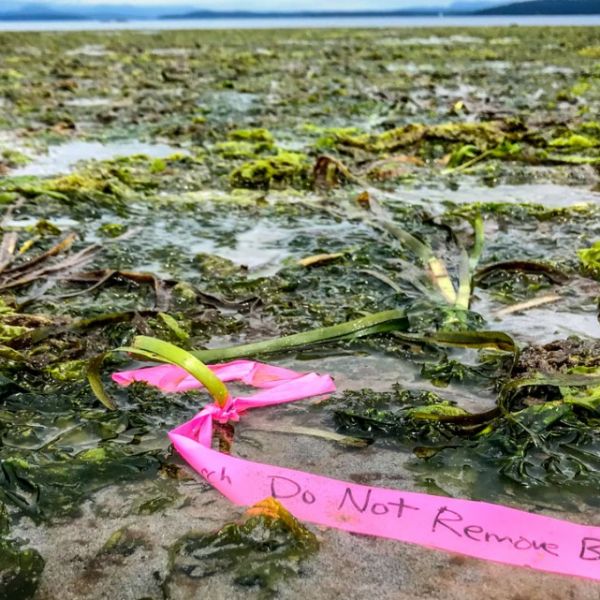 By Blaine Friedlander for the Cornell Chronicle

In an oceanic omen for climate change’s intensifying effects, Cornell-led research (including Carla P. Gomes, professor in the Cornell Ann S. Bowers College of Computing and Information Science) shows that seagrass – through large swaths of intertidal meadows in the Pacific Northwest – suffers from a lesion-filled wasting disease. The grasses’ once-vibrant plant root systems are deteriorating, too.

The research was published Nov. 10 in the journal Frontiers in Marine Science.

“Not only are we seeing more seagrass wasting disease outbreaks, we’re seeing a severe impact within the vital nutrient stores of these plants in the roots – so they become compromised late in the growing season, setting them up for a harder winter,” said co-lead author Olivia Graham, a doctoral student in the field of ecology and evolutionary biology.

The other lead author is Lillian R. Aoki, a former postdoctoral researcher in the Department of Ecology and Evolutionary Biology, in the College of Agriculture and Life Sciences.

Eelgrass (Zostera marina) normally thrives in the San Juan Islands, Washington, on the Salish Sea along the Canadian border. In typical scenarios, Graham describes the seagrass meadow environment as bountiful underwater rainforests, which clean the waters and support herring, salmon, perch, clams, mussels and oysters. Nearby, orca whales feast on Chinook salmon – the largest of the Pacific salmon – which live in these tidal grasslands.

Seagrass wasting disease has been present for years, thanks to the warming waters of climate change, which strengthens the plant’s disease nemesis Labyrinthula zosterae. This paper confirms that below the muddy beds, the plant’s roots are compromised.

In their research, Graham and Aoki marked hundreds of plants at low tide and followed the meadow’s fate over several weeks. This “mark and recapture” method showed that seagrass with disease lesions grew more slowly and produced less storage sugars than their healthy counterparts.

“This answers a long-standing question about whether this disease does actual damage,” said senior author Drew Harvell, professor emeritus in ecology and evolutionary biology, in CALS. “Unfortunately, it is a resounding ‘yes.’”

Eelgrass plants spread vegetatively, Harvell said, noting that seagrass roots have huge systems where carbohydrates and sugars get manufactured and stored, to expand their own lush networks.

“This paper really nails it,” Harvell said. “Plants were tagged in the natural meadow and each one followed through time. We learned that the lesioned plants had reduced starch reserves and grew more slowly, so now we can say that the wasting disease is even bigger than most thought – and the harm goes well beyond the lesions.”

A related paper by the Cornell team, “Warming Sea Surface Temperatures Fuel Summer Epidemics of Eelgrass Wasting Disease,” published Nov. 25 in the Marine Ecology Progress Series, showed increasing levels of eelgrass wasting disease at the San Juan Islands, from 5% to 70% in 2013, and then increasing to 60% to 90% by 2017. Eelgrass shoot density declined by 60% between 2013 and 2015 and did not recover. Further, the work shows the disease prevalence was correlated with warmer water temperatures for the month prior to sampling. The study shows increasing levels of disease in multiples sites in 2017.

A version of this story appeared in the Cornell Chronicle