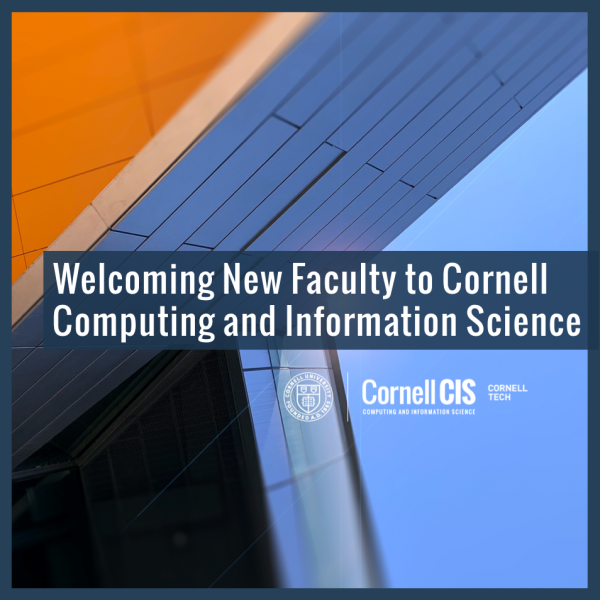 To meet growing annual student enrollments across its three departments, Cornell Computing and Information Science [CIS] has added 14 new faculty members to guide the next generation of tech leaders and innovators.

This Fall, CIS – a unit made up of the departments of Computer Science, Information Science, and Statistics and Data Science – is proud to add the following scholars to its esteemed faculty.

Noah Stephens-Davidowitz joins the Ithaca-based CS faculty as an assistant professor, starting this Fall. His research primarily uses the tools of theoretical computer science to answer fundamental questions about the security of widely deployed real-world cryptography, particularly post-quantum lattice-based cryptography. He is also interested in theoretical computer science, cryptography, and geometry more broadly. He received his Ph.D. from NYU and became a postdoc at Princeton’s computer science department and a visiting researcher at the Institute for Advanced Study’s math department—both as part of the Simons Collaboration on Algorithms and Geometry. He was also a postdoctoral researcher at MIT’s computer science department. Before arriving at Cornell, he was a fellow at the Simons Institute in Berkeley as part of the program Lattices: Algorithms, Complexity, and Cryptography.

Anke van Zuylen joins the Ithaca-based CS faculty as a senior lecturer, starting this Fall. Anke’s research interests are in discrete optimization with a focus on designing and analyzing algorithms for problems arising in areas such as network design, logistics, computational biology and information science. Anke will return to Ithaca and Cornell after a twelve-year odyssey that took her to China, Germany, and Virginia. She received a Ph.D. in Operations Research from Cornell in 2008. She then spent two years as a postdoctoral researcher at the Institute for Theoretical Computer Science of Tsinghua University in Beijing, China. She was the first recipient of the Lise Meitner Award Fellowship for Excellent Women in Computer Science, spending the next two years as a postdoctoral fellow at the Max Planck Institute for Informatics in Saarbruecken, Germany. At both institutes, she did research and developed and taught courses at the undergraduate and graduate level. Immediately prior to joining Cornell CS, she was an associate professor in the Mathematics Department at William & Mary where she taught in the undergraduate mathematics curriculum and in the graduate program in Computational Operations Research.

Abe Davis joins the Ithaca-based CS faculty as an assistant professor, starting this Fall. Abe’s research involves graphics, vision, and Human-Computer Interaction and he has a keen interest in converting research findings to everyday applications, such as photography, sound, and video. He completed his Ph.D. at MIT in 2016, and later became a postdoctoral researcher at Stanford University. His research interests sit at the intersection of different fields. For example, in recent years, progress on foundational problems in computer vision and graphics has opened up a whole landscape of opportunities for imaging and computation.

Wen Sun joins the Ithaca-based CS faculty as an assistant professor, starting this Fall. Wen’s key research is in Machine Learning and Reinforcement Learning (RL), and much of his work focuses on designing algorithms for efficient sequential decision making, understanding exploration and exploitation tradeoff, and leveraging expert demonstrations to overcome exploration. He received a Ph.D. in Robotics from Carnegie Mellon University. During the 2019-20 academic year, he was a postdoctoral researcher at Microsoft Research in New York City working on several aspects of RL including representation learning in RL, policy gradient methods, and nonlinear control.  At Cornell, he looks forward to teaching courses on machine learning and artificial intelligence. This Fall, he is excited to teach a new course on Foundations of Reinforcement Learning, which aims to cover a diverse set of topics including (but not limited to) planning, adaptive control, imitation learning, and sample efficient exploration.

Owolabi Legunsen joins the Ithaca-based CS faculty as an assistant professor, starting this Fall. Owolabi’s research interests are in software engineering and applied formal methods with a focus on software testing and runtime verification. He received his Ph.D. in Computer Science from the University of Illinois at Urbana-Champaign. Before that, he received an M.S. in Software Engineering from the University of Texas at Dallas. Owolabi decided to pursue graduate studies while working as a software developer in Nigeria, where he had obtained his B.S. degree. His work experience inspires his research: he aims to find disciplined approaches to solving challenging problems that developers face in producing high-quality software. At Cornell, Owolabi will carry out research that can enable developers to use runtime verification and other formal methods to find bugs more efficiently and effectively during everyday software development.

Tapo Bhattacharjee will join the Ithaca-based CS faculty as an assistant professor, starting Fall 2021. Tapomayukh’s fundamental research question is how to leverage robot-world physical interactions in unstructured human environments to perform relevant activities of daily living. His research spans the fields of Human-Robot Interaction, Haptic Perception, and Robot Manipulation. He did his Ph.D. in Robotics at the Institute of Robotics and Intelligent Machines (IRIM) at Georgia Tech. His Ph.D. dissertation was on rapid haptic perception using force and thermal sensing. Tapo is currently an NIH Ruth L. Kirschstein NRSA Postdoctoral Fellow in Computer Science and Engineering at the University of Washington, where he is working with Sidd Srinivasa at the Personal Robotics Lab on food manipulation in the context of assistive feeding tasks. Upon arriving at Cornell, he would like to continue working towards his goal to enable robots to assist people with mobility limitations with tasks for daily living.

Kevin Ellis will join the Ithaca-based CS faculty as an assistant professor, starting Fall 2021. Kevin works on program induction—building machines which learn to write code—which has applications and connections to programming languages, but also several areas of AI, such as model structure learning, neurosymbolic methods, and semantic parsing. Currently in his final-year of a Ph.D. at MIT, Kevin is working in machine learning and program synthesis. During the gap between completing his graduate school training and starting at Cornell, Kevin will be working at Common Sense Machines in the overlap between program induction and machine vision. He plans to build a research group blending artificial intelligence and program synthesis, as well as teaching AI and creating a new program synthesis class.

Emma Pierson will join the New York City-based CS faculty as an assistant professor, starting Fall 2021. Emma’s research involves the development of data science and machine learning methods to study two broad areas: inequality and healthcare. Most recently, she has been studying inequality in policing, pain, and COVID-19. Supported by Hertz and NDSEG Fellowships, she earned a Ph.D. in computer science at Stanford. Before her Ph.D., she completed a master’s degree in statistics at Oxford on a Rhodes Scholarship, and before that, she spent a year as a data scientist at 23andMe and Coursera. For 2020-21, she will be a Senior Researcher at Microsoft Research New England.

Sharlane Cleare joins the Ithaca-based Info Sci faculty as a lecturer, starting this Fall. Her research focuses on broadening STEM participation for underrepresented people of color by understanding how various learning experiences influence their intent to persist in STEM. Cleare received a BA in Computer Information Systems from Georgia State University, an MBA from Clark Atlanta University, a Masters in Technology Leadership & Innovation from Purdue University, and PhD in Technology from Purdue, with a dissertation on understanding Black women’s experiences in a first-year undergraduate human centered design course. Prior to joining Cornell, she worked as a Project Manager at Sprint, a Business development consultant at Oracle, and Project Manager at Providence Technology Group in Nassau, Bahamas.

Chris Csíkszentmihályi joins the Ithaca-based Info Sci faculty as an associate professor, starting this Fall. Previously, he was a European Research Area Chair in Portugal, and founded the free/libre Rootio Project, a sociotechnical platform for community radio. Csíkszentmihályi has been a professor at universities in the USA and Europe: notably founding and directing the MIT Center for Future Civic Media (C4), dedicated to developing technologies that strengthen communities, and also the MIT Media Lab's Computing Culture group, creating unique media technologies for cultural and political applications. He has been a Radcliffe Fellow and a Rockefeller New Media Fellow, and has exhibited installations and performed on most continents. He currently sits on the board of the DATACTIVE ERC project at U. Amsterdam and the EPSRC Centre for Doctoral Training in Digital Civics at Newcastle University.

​Gili Vidan will join the Ithaca-based Info Sci faculty starting July 2021. Her work looks at digital information technologies, changing notions of public trust and democratic governance, and narratives of crisis and future-making in the US. Her dissertation, “Technologies of Trust,” traces technical attempts to solve the problems of trust and transparency, with a focus on the development of public-key cryptography in late 20th- and early 21st-century US. She is the 2019-20 Ambrose Monell Foundation Fellow in Technology and Democracy at the Jefferson Scholars Foundation.

Matthew Wilkens joins the Ithaca-based Info Sci faculty as an associate professor, starting this Fall. He uses quantitative and computational methods to study large-scale developments in literary and cultural history. His work has focused in particular on literary text mining, geolocation extraction, genre detection, and the cross-pollination of critical and social-scientific methods. He is the director of the Textual Geographies project, a co-investigator of the Text Mining the Novel project, a founding editorial board member of the Journal of Cultural Analytics, and the author of "Revolution: The Event in Postwar Fiction". Prior to arriving at Cornell, Wilkens taught at the University of Notre Dame, where he was Ruth and Paul Idzik Associate Professor in Digital Scholarship, and at Wayne State University. He received his PhD in Literature from Duke University, master's degrees in English from the University of Wisconsin-Madison and in physical chemistry from the University of California-Berkeley, and a bachelor's degree in chemistry and philosophy from the College of William and Mary.

Qian Yang joins the Ithaca-based Info Sci faculty as an assistant professor, starting this Fall. As a human-AI interaction researcher, Yang helps translate AI's algorithmic advances into valuable real-world applications that serve human ends. Yang has so far designed several high-consequence AI applications: from decision support systems for life-and-death healthcare decisions (i.e. artificial heart implants and cancer diagnoses) to context-aware mobile services, from Natural Language Generation systems to autonomous cars. Building upon this related vein of practice, she works to inform a basic understanding of AI as a material for HCI design. In addition, she innovates methods and tools for the UX design and HCI practicing communities, helping them to better integrate AI into their day-to-day practices. Yang completed her PhD in human-computer Interaction at Carnegie Mellon's School of Computer Science. She holds master's degrees in HCI from Carnegie Mellon University and in Design and Bachelor of Engineering in Industrial Design from Shanghai Jiaotong University. Before CMU, she worked in design consultancy and in the industry (2007-2014).

Ahmed El Alaoui will join the Statistics and Data Science faculty as an assistant professor, starting January 2021. El Alaoui is currently a Simons-Berkeley research fellow at the Simons Institute for the Theory of Computing at UC Berkeley. His research interests revolve around high-dimensional phenomena in statistics and probability theory, statistical physics, algorithms, and problems where these areas meet. El Alaoui received his PhD in 2018 in Electrical Engineering and Computer Sciences from UC Berkeley, and was afterwards a postdoctoral researcher at Stanford University.