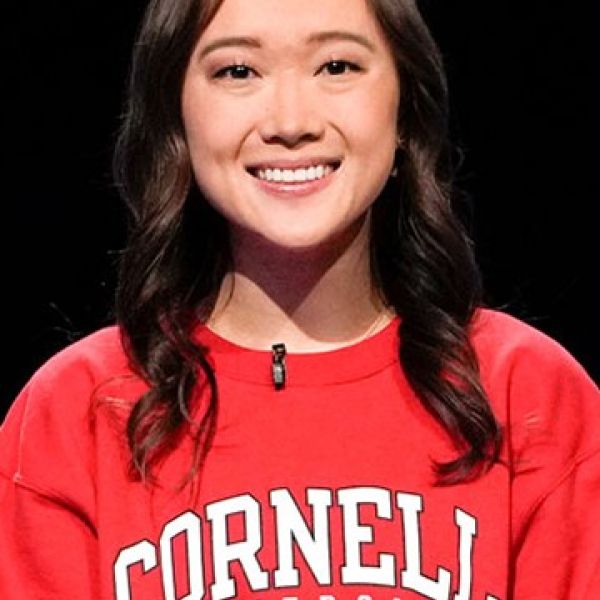 Catherine Zhang ’22 to compete on Jeopardy

By Susan Kelley for the Cornell Chronicle

Two Cornellians will compete on “Jeopardy!” Feb. 8, with episodes airing on ABC and streaming on Hulu.

Andrés Quijano ’22 of San Juan, Puerto Rico, will compete at 7:30 p.m. Catherine Zhang ’22, a computer science and sociology major from Pennington, New Jersey, will compete at 8 p.m. on the “Jeopardy!” National College Championship.

“For as long as I can remember, I’ve been a fiend for facts,” Quijano said. “Being on ‘Jeopardy!’ fully engaged my fascination for a wide array of topics and disciplines. My fervent desire to learn fittingly aligns with my dream to work in public policy or foreign affairs.”

Zhang has been watching “Jeopardy!” since she was young and decided to take the online test for the college tournament last year, she said.

“Learning that I was going to be on the show was unbelievably exciting and surreal,” Zhang said. “I couldn’t be more grateful to have had this opportunity and to have met so many amazing students from around the country who love the show as much as I do.”

Zhang, who graduated in December, said it is an honor to represent Cornell in the tournament.

“The questions on ‘Jeopardy!’ cover such a wide breadth of topics, and having taken so many different classes across the liberal arts definitely contributed to my experience on the show,” she said, praising her adviser, Kendra Bischoff, associate professor of sociology in the College of Arts and Sciences.

This story originally appeared in the Cornell Chronicle