Our vision for CIS is a bold one: to be the national model for education and research that supports the information economy.

One of the ways we are achieving this is by creating an intellectually stimulating environment conducive to collaboration and innovation. Critical to our efforts to increase collaborative ties among our students and faculty was a physical space that unites our core departments, inspires creativity, enables team-based project work, and fosters cross-college interactions. Our new space – Bill & Melinda Gates Hall – reflects the essence of the information age through its integration of technology and architecture in its open and outdoor spaces, classrooms, labs and offices.

Gates Hall was fully funded with no additional debt before the first shovel hit the ground. Starting with a generous $25 million donation from the Bill & Melinda Gates Foundation, fundraising for the $60 million project concluded in the fall of 2010 with donors from almost every Cornell college. Groundbreaking for the new building, located at the corner of Hoy and Campus Roads on Cornell University’s Ithaca campus, was in early April 2012. Construction concluded in January 2014. Formal dedication of the building is scheduled for October 1, 2014 as part of the celebration of the 50th anniversary of Computer Science at Cornell.

Where to find us

Gates Hall is located at the corner of Hoy and Campus Roads near the Engineering quad on Cornell University's Ithaca campus. If you are interested in touring the building or would like information on room bookings, please contact the CIS Dean's Office. 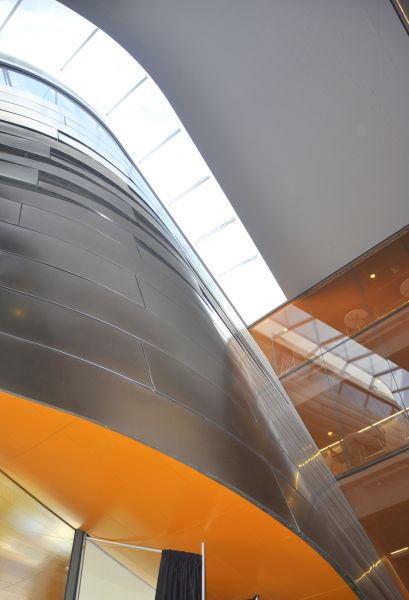 Bill & Melinda Gates Hall was designed by Morphosis Architects. Morphosis is an interdisciplinary architectural practice involved in rigorous design and research that yields innovative, iconic buildings and urban environments. With founder Pritzker prize-winning architect Thom Mayne serving as design director, the firm is committed to the practice of architecture as a collaborative enterprise. In addition to Bill & Melinda Gates Hall, Morphosis was chosen to design the first academic building on Cornell Tech's New York City campus. Perhaps best known in New York for its sculptural and futuristic Cooper Union Arts and Sciences building, Morphosis' Cornell buildings are sure to become upstate-downstate high-tech icons.