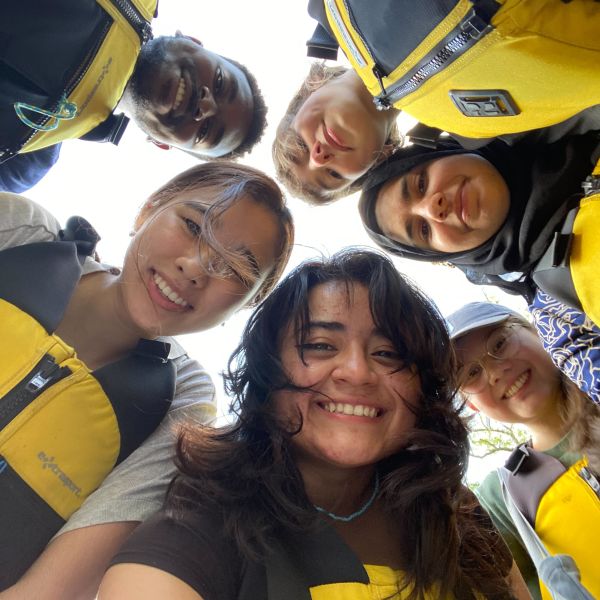 When Alisa Castillo ’25, a middle child from California with parents of Salvadorean and Nicaraguan descent, started taking computer science courses in her first year at Cornell, she already felt she had a lot to catch up on.

“I got to know people who came here with a lot of experience under their belt,” she said. “Some already worked on their own personal projects before coming and had years of experience knowing XYZ languages.”

To better catch up with some of her classmates, she applied for CSMore, a program run by the Office of Diversity, Equity, and Inclusion for the Cornell Ann S. Bowers College of Computing and Information Science to help prepare people from underrepresented minority groups so they join the computer science field.

Castillo had taken engineering classes in high school, but once at Cornell, she jumped around between potential majors. “Doing CSMore solidified that I wanted CS to be part of my curriculum and made me want to learn more about the subject,” Castillo said.

Now in its third year, CSMore has grown from a three-week online class held during the early days of the COVID-19 pandemic to a rigorous, one-month, in-person program that prepares students for three of the traditional sophomore courses — complete with faculty research talks, a full slate of social activities, and networking opportunities with major companies.

And the program continues to expand. The Office of Diversity, Equity, and Inclusion has organized additional enrichment opportunities throughout the fall and spring semesters, in a follow-up program called CSMore Works.

“These students came to Cornell during the pandemic, which has been a uniquely isolating time,” said LeeAnn Roberts, director for Diversity, Equity, and Inclusion for Cornell Bowers CIS. “We aim to build a community within the college that these students can rely on for the remainder of their academic experience, and beyond.”

Through these efforts, the organizers hope to encourage more students from underrepresented minority groups to major in computer science, and ultimately, to diversify the faces behind tech companies and academic research.

Students falling through the cracks

The idea for CSMore germinated about four years ago, when Anne Bracy, a senior lecturer in computer science, was looking at data on sophomores enrolled in computer science classes. She saw that students belonging to underrepresented minority groups more often struggled with coursework and dropped classes compared to white male students.

“Some of it is lack of proper background — students that come from high schools that don't prepare them as well,” said Éva Tardos, the Jacob Gould Schurman Professor of Computer Science, department chair, and co-founder of CSMore. “Some of it is lack of community — a group of students studying together can be very helpful in catching up. There are lots of different factors and we wanted to help.”

Tech has long had a diversity problem. While the Cornell Department of Computer Science is doing better than most, it still strives to make the demographics of its student population reflect the population at large. At Cornell, 38 percent of undergrad computer science majors are women, compared to 18 percent nationally, and 14 percent belong to an underrepresented minority group, compared to 6 percent nationwide.

Bracy, Tardos, and Hakim Weatherspoon, professor of computer science, who are all affiliated with Cornell Engineering, decided to develop a program targeting rising sophomores who are from underrepresented minority groups or have faced other challenges, such as being a first-generation college student or growing up in a single-parent home.

The resulting summer course, CSMore, condenses the first few weeks of three core classes, CS 2800, CS 3110, and CS 3410, for a class of 30 students instead of 300. The small class size allows students to ask questions, build friendships, and connect with faculty, giving them a better foundation to advance in the major and the field.

Students also learn fundamental skills in a tech bootcamp and hear from faculty about their personal journey to becoming a professor, their research, and how students can get involved.

While most participants this year were entering their sophomore year, rising junior Setor Kudiabor took the course to ease the transition as he changes majors. Kudiabor grew up in Accra, Ghana where he completed a challenging course load in high school with the goal of pursuing aerospace engineering. But feeling that mechanical engineering wasn’t the right fit, he took a computer science course and was hooked.

“I feel like I enjoy the hard work and I enjoy the reward that comes with it,” Kudiabor said. “CSMore has the right blend of academic work, fun, and extracurricular activities — 10 out of 10, would recommend.”

Now, he has set his sights on becoming a software engineer at a tech company.

Outside of class, students had a busy social schedule, with activities including a sunset cruise on Cayuga Lake, hiking at Treman State Park, a ropes course, and a trivia night with faculty.

Castillo said that this time exploring Ithaca really helped her get to know fellow CS majors, giving her “more people that I can look to and know before I enter my classes.”

In the evenings, students attended information sessions hosted by corporate sponsors Meta, Google, Microsoft, Goldman Sachs, and Wayfair. There, they had the opportunity to network with staff, ask questions about internships, and envision potential career paths at the companies. They also received advice about crafting their resumes and LinkedIn profiles and how to land a job post-graduation.

“We definitely need stuff like this. Not only because we get to meet with and network with these companies, but because we don't even know where to start,” said Julio Leanez ’25, a participant who was initially from Caracas, Venezuela, but moved around between Spain, Chile, and Florida due to his father’s job in the banking industry.

Leanez remembers feeling overwhelmed by the U.S. college application process, and realizing that he had to work “a little harder than everyone else just to get on the same level,” an awareness that he credits with getting him to Cornell. He said CSMore has been “an amazing opportunity that has reinforced my appreciation for computer science.” After graduation, he envisions entering industry, and perhaps eventually returning to Venezuela.

“Obviously, computing is the future — all the new big companies are related to computing. With the rise of machine learning and artificial intelligence, I believe that it will play a major role in politics as well, so I think that using it responsibly is important,” Leanez said. “I would like to be involved with that process.”

One vital aspect of the program is that participants receive a stipend and room and board during the course. This removes some of the financial pressure to work during the summer, providing funds for books and other expenses. Support for CSMore comes from the corporate sponsors, as well as the Hopper-Dean Foundation.

Currently, the first cohort of CSMore participants are rising seniors. Anecdotally, Tardos said she sees more CSMore students sticking with the major. As the program continues, the DEI office will follow the career path of past students to measure the program’s success.

One indication of its success, however,  is the many former participants who have returned as teaching assistants (TAs).

Jaden O’Brien ’23, a rising senior in computer science, completed the program in its online form in 2020 and returned as a TA in 2021 and 2022. Even though she arrived at Cornell knowing she wanted to major in computer science and took a course in high school, she still found the class to be valuable. “The whole topic can be very frustrating and overwhelming. Certain topics were definitely difficult to grasp at first if you don't know how to go about it,” O’Brien said. “I saw this as an opportunity to work with people who are just like me and give back to the program.”

CSMore participants can now continue through the fall and spring semester with CSMore Works. They will have access to one-on-one mentoring from former CSMore graduates, tutoring through the DEI office’s Academic Resources for Community Success (ARCS) tutoring program, and academic support through Academic Excellence Workshops. These one-credit workshops, facilitated by undergraduates, have been shown to boost grades and improve student understanding. There will also be additional social activities, professional development workshops, and corporate networking opportunities.

“We want students to emerge from our program with a solid community they can rely on to help each other to advance throughout their careers, and elevate future participants,” said Cass D’Amato, assistant director for Diversity, Equity, and Inclusion for Cornell Bowers CIS. “That is how we can truly change the face of tech.”

When asked how he felt about the end of the summer session, Kudiabor said, “it’s bittersweet because we’ve made so many memories and met so many good people. I’m not mad or sad it’s coming to an end. I’m happy because the upcoming semester looks promising, both academically and socially.”

By Patricia Waldron, a science writer for the Cornell Ann S. Bowers College of Computing and Information Science.