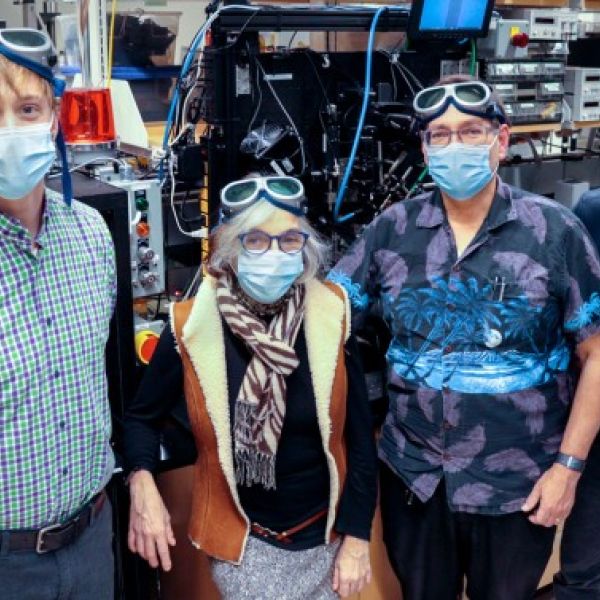 When a master chef develops a new cake recipe, she doesn’t try every conceivable combination of ingredients to see which one works best. The chef uses prior baking knowledge and basic principles to more efficiently search for that winning formula.

Materials scientists use a similar method in searching for novel materials with unique properties in fields such as renewable energy and microelectronics. And a new artificial intelligence tool developed by Cornell researchers promises to rapidly explore and identify what it takes to “whip up” new materials.

Sebastian Ament, doctoral student in the field of computer science, and Maximilian Amsler, former postdoctoral researcher and now a visiting scientist at Cornell, are co-lead authors of “Autonomous Synthesis Via Hierarchical Active Learning of Nonequilibrium Phase Diagrams,” which published Dec. 17 in Science Advances.

The first prototype of SARA was developed by a multidisciplinary team co-led by R. Bruce van Dover, the Walter S. Carpenter, Jr., Professor of Engineering; Michael Thompson, the Dwight C. Baum Professor of Engineering, both in the Department of Materials Science and Engineering (MSE); Carla Gomes, the Ronald C. and Antonia V. Nielsen Professor of Computing and Information Science in the Cornell Ann S. Bowers College of Computing and Information Science; and John Gregoire, Ph.D. ’ 09, a research professor at the California Institute of Technology.

For this work, the researchers are focusing on inorganic materials, especially those that can be trapped in “metastable” states that ultimately may transform to an “equilibrium” state with time. For example, diamond is metastable and will eventually transform into graphite if given enough time.

Many such metastable materials have unique properties that make them desirable for many applications, but since they do not exist naturally, identifying them can be a time- and labor-intensive exercise. SARA, the researchers said, can cut the experimental time required to characterize a new materials system by one to two orders of magnitude – from days to hours, and hours to minutes.

“All the useful things we work with tend to be metastable – iron and silicon, for example – all in structures that aren’t quite equilibrium, which give them their unique properties,” Thompson said. “And so part of the search is looking for new materials and new structures that have critical properties.”

SARA conducts these searches with lightning speed. After analyzing one sliver of material – in this case, the different phases and temperature-related characteristics of bismuth oxide, deposited in a thin film onto a wafer by sputtering and processed by a technique called lateral gradient laser spike annealing – SARA decides on the next experiment to be performed, performs it immediately, and then repeat the process. Each of these loops is completed in just a few seconds.

Experiments were performed at the Materials Solutions Network at CHESS (MSN-C), as well as at the Cornell NanoScale Science and Technology Facility.

“The computer is controlling the experiment, in situ and live,” Thompson said. “There’s a command to process material under particular conditions, and then immediately characterize it, and make a new decision about what the next experiment will be, based on the immediate new knowledge that’s now available.”

“So having figured out what the next experiment is, it actually does that experiment,” van Dover said. “And then goes on and reinterprets and then it comes up with another experiment – all without human intervention.”

Gregoire referred to SARA as a “self-driving laboratory.”

“Suppose you’re on a mountain and using autonomous navigation,” he said. “You have one part of the program that’s figuring out how to get to the top of one peak, and another that’s taking pictures of the entire mountain range, to say ‘Hey, maybe I should go walk on this other peak for a while.’”

Van Dover sees it as a qualitative hierarchy, as well as a quantitative one.

“In science, there is huge opportunity for looking at qualitatively different dimensions,” he said. “I would say [SARA represents] going from looking at the topography of mountain ranges to, all of a sudden, incorporating what kind of trees or insects or animals are present. That’s kind of a different dimension.”

This work, Gomes said, fits into the Radical Collaboration initiative sponsored by the Office of the Provost.

“We’ve brought together researchers in AI, computer science, materials science,” said Gomes, who’s also director of the Institute for Computational Sustainability at Cornell. “The idea is, we have AI performing part of the scientific process.”

Support for this research came from the Air Force Office of Scientific Research (AFOSR), the National Science Foundation (NSF), the Swiss National Science Foundation and the Cornell University Center for Advanced Computing. The MSN-C is supported by the Air Force Research Laboratory; the Cornell NanoScale Facility is a member a member of the National Nanotechnology Coordinated Infrastructure, which is supported by the NSF.

A version of this story appeared in the Cornell Chronicle