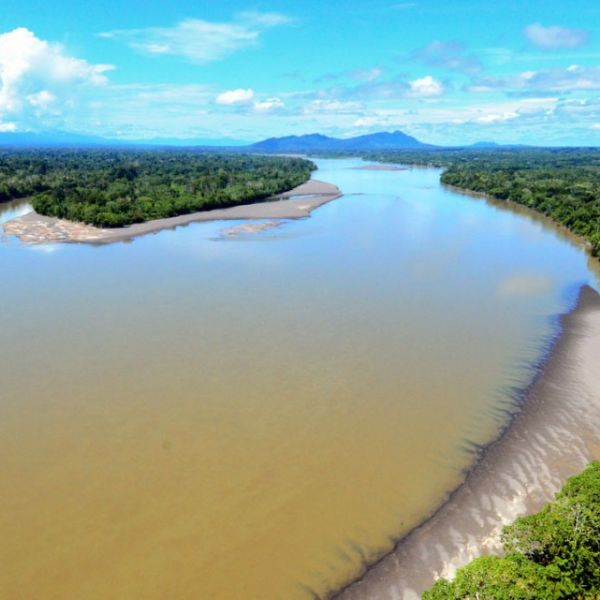 Biologist Alexander Flecker approached computer scientist Carla Gomes a few years ago with an ambitious proposal: Harness AI and other tools, in collaboration with a diverse group of Amazon river basin experts, to understand how to meet hydropower needs with the least amount of environmental damage.

The idea was to start with the many proposed hydropower dams in the Marañón River basin, in Peru and Ecuador. At nearly 1,100 miles long, the Marañón is one of the largest free-flowing rivers in South America, and one of the main headwaters of the 4,345-mile-long Amazon River. Weeding through massive portfolios involving the placement of dozens of dams, with each affecting the other as well as the river’s flow, was a gargantuan request.

Gomes’ response? Why not consider the entire Amazon basin – approximately 2.4 million square miles, more than a third of the continent?

“As we got more excited, I thought, ‘Let’s keep pushing, let’s go big,’” said Gomes, the Ronald C. and Antonia V. Nielsen Professor in the Cornell Ann S. Bowers College of Computing and Information Science. “I felt that we could really develop these AI techniques to scale to the entire Amazon basin.” 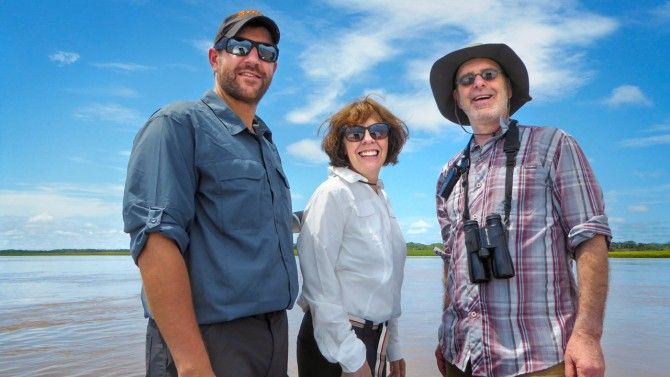 Suresh Sethi, Carla Gomes, and Alex Flecker, are pictured on a field trip to the Marañón River, in Peru.

Flecker and Gomes co-led the project and are corresponding authors of “Reducing Adverse Impacts of Amazon Hydropower Expansion,” which published Feb. 17 in Science. The paper features a total of 40 co-authors from more than two dozen academic institutions in the U.S., Europe and South America, along with NGOs including The Nature Conservancy and the Wildlife Conservation Society.

“What makes this work special is that we’re bringing together so many different areas of expertise, and real Amazon experts, in areas such as ecology, fisheries biology, hydrology, social science, and computer science and AI,” said Flecker, professor in the Department of Ecology and Evolutionary Biology in the College of Agriculture and Life Sciences. “For us, that’s been incredibly exciting.”

This research emphasizes the importance of strategic planning at the scale of the entire Amazon basin, and pushes the frontiers of the work Gomes and Flecker published in 2019 led by former Cornell Atkinson postdoctoral fellow Rafael Almeida, also a co-author of this research, that sought to optimize selection of dams in the Amazon basin with respect to lowering greenhouse gas emissions. This work is substantially more ambitious in providing insights about the largest and most biodiverse transboundary river basin in the world, which spans eight countries.

The project considers six socio-environmental criteria for optimization of the more than 350 proposed hydroelectric dams in the Amazon basin:

And not only does the current work seek to optimize new dam selection, it seeks to reveal lost benefits from the 158 existing hydropower dams in the basin, originally placed without coordinated planning that considered their cumulative negative effects. Calculating all the potential solutions, the researchers said, yields a number that is “greater than the number of atoms in the entire universe,” Gomes said.

“We are talking about more than 3 million riverine segments, combined with more than 500 dams, and multiple criteria,” Gomes said. “So not only do we have to try to organize the solutions in terms of energy, we want to compare them in terms of all the criteria. The computational requirements are formidable.”

Flecker, in fact, thought it was more than just formidable.

“I didn’t think it would be possible,” said Flecker, who has done extensive research in Latin America and the Caribbean. “As someone who has spent a lot of time in South America, and knowing just how huge (the Marañón) is, I really didn’t think that it was realistic.”

Gomes and her team of computer scientists developed a highly efficient “divide and conquer” approximation algorithm to identify not only the best options but also the worst, which could be eliminated from consideration.

The team’s approach determines what’s known as the “Pareto-optimal frontier” – the portfolios of dam configurations that minimize negative effects across all six criteria for any given level of aggregate hydropower yield. The approach eliminates lower-quality solutions.

The paper shows that the historical lack of strategic coordinated planning has resulted in forgone environmental benefits, and lays out four key strategies for reducing environmental damage from future dam construction. The first, and perhaps most basic, is that multi-objective optimization provides an effective “first filter” to identify the many dam sites that would yield particularly negative results.

“A key is getting the worst dams off the table, and that’s really critical and something that gets neglected,” Flecker said. “And it took us a while to realize that we had this tool for doing that.”

The second key idea complements the first: Simultaneous consideration of multiple criteria is critical for identifying the least detrimental projects with respect to ecosystem services – the benefits that healthy rivers provide, such as fisheries, biodiversity, floodplain agriculture and undisrupted navigation routes.

“As more environmental criteria are included,” Flecker said, “fewer dams remain that can be considered relatively low impact, pointing to the need for examining many different objectives simultaneously.”

Third, basin-wide analysis is essential for minimizing forgone ecosystem service benefits. Planning at smaller scales can yield misleading outcomes, missing some of the damage incurred by some hydropower dams when evaluated at the scale of the entire Amazon basin.

Finally, international cooperation in hydropower planning is paramount for reducing negative environmental outcomes. They show that some seemingly good solutions from the perspective of individual countries might in reality be quite harmful when the entire Amazon basin is considered.

As director of Cornell’s Institute for Computational Sustainability, Gomes is acutely aware of the importance of this work.

“It is really a pleasure and uniquely rewarding that we are using computer science and AI to address this sustainability challenge,” she said. “AI is being used by Wall Street, by social media, for all kinds of purposes – why not use AI to tackle serious problems like sustainability?” 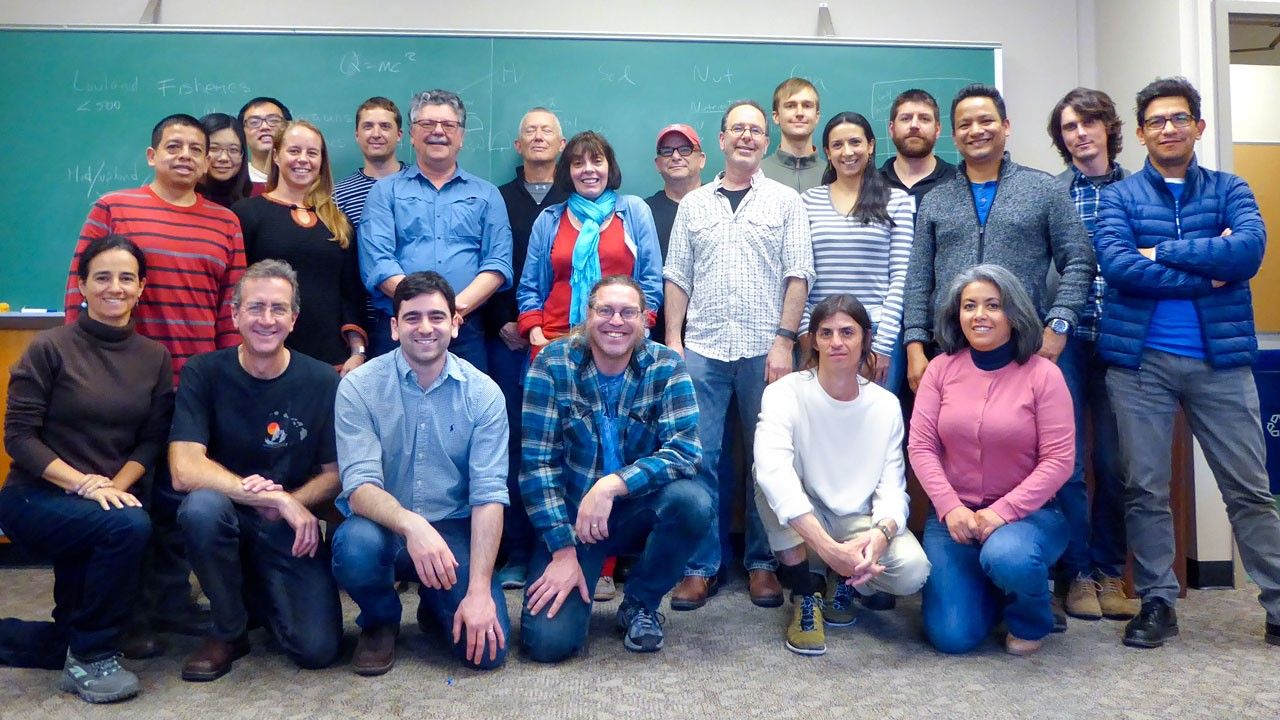 Contributors were from more than 25 academic and non-academic institutions from the U.S., Brazil, Colombia, Ecuador, France and Peru.