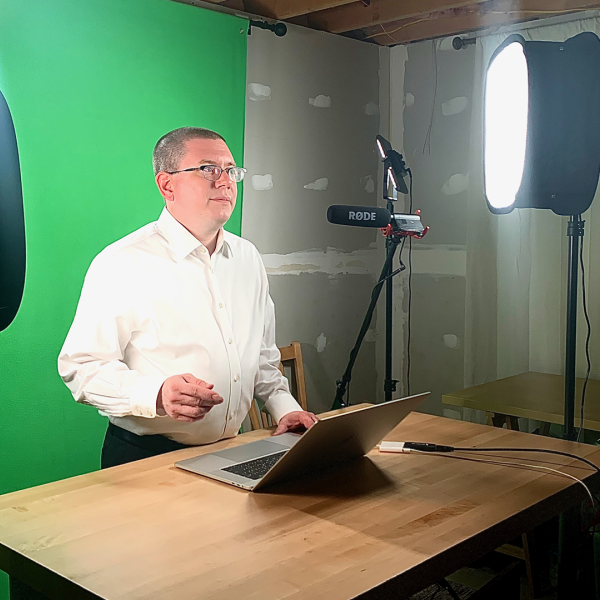 Some YouTubers get popular for playing video games, unboxing toys, or making how-to videos. Michael Clarkson Ph.D ‘10, did it with instructional videos on the programming language OCaml.

His YouTube channel recently surpassed more than a quarter-million hits, with viewers tuning in from every continent except Antarctica.

“I built a recording studio in my basement with a green screen,” said Clarkson, who is a senior lecturer of computer science in the Cornell Ann S. Bowers College of Computing and Information Science. “I spent that whole fall recording videos. It was basically my life that semester.”

After teaching asynchronously again in spring 2021, Clarkson resumed in-person classes in the fall, and decided to publish the videos on YouTube for a wider audience.

“I teach up to 1,000 students a year to program here at Cornell, but now I have a way of reaching way more people,” Clarkson said. “I've had employees from major tech companies email me and a woman from Uganda with an accounting degree who is self-learning functional programming. There aren't a lot of OCaml videos out there as it turns out.”

While OCaml is not as popular as Python or JavaScript, it is one of the major functional programming languages, used by many companies, including Meta, Microsoft, and Bloomberg.

“We teach OCaml in 3110 because functional programming is an influential paradigm, and by learning about it students can become better programmers in any language they use now or later,” Clarkson said. “Functional programming features are now being adopted by popular languages, in part, because it enables elegant and less error-prone ways of expressing computations.”

“OCaml in particular is great for this because it is a well-designed language with a relatively simple computational model -- it's beautiful,” he added.

Clarkson has also embedded the videos in the course’s open-source textbook, OCaml Programming: Correct + Efficient + Beautiful, which he developed using contributions from two decades of past instructors.

Now, Clarkson has moved on to videos about another programming language, Coq, for teaching CS 4160. He also has a TikTok channel he began while teaching remotely, as another way to connect with students. While it is not yet as popular as his YouTube channel, the short videos have nearly 12,000 likes so far.

By Patricia Waldron, a science writer for the Cornell Ann S. Bowers College of Computing and Information Science.