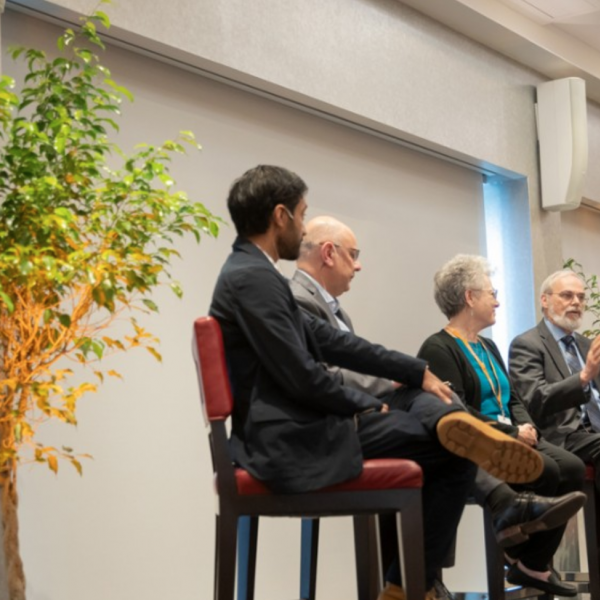 Every aspect of higher education – teaching, learning and research – has been transformed by computing, but technological advances must incorporate human needs in order to succeed, according to university administrators at a panel on the role of technology in education.

“I’m trained as a computer scientist, [and] I do think some computational thinking is important,” said Cornell President Martha E. Pollack, among the panelists at “The Changing Role of Computing, Information and Data Science in Society and Education: A University Leaders Panel,” held Oct. 3 in the Statler Ballroom.

She noted, however, that students need rich social interactions as well as instruction, and exposure to liberal arts and critical thinking as well as coding.

“There’s this notion that comes out of the military world of the world being VUCA – volatile, uncertain, complex and ambiguous,” Pollack said. “And in today’s world, demonstrably, all of those things are happening at an increased pace. The more that happens, the more we need students who have learned how to learn, and that’s what our universities are trying to provide.”

The panel, part of the Faculty of Computing and Information Science’s 20th anniversary symposium, was moderated by New York Times columnist Farhad Manjoo ’00. It also included W. Eric Grimson, the Massachusetts Institute of Technology chancellor for academic advancement who also is the Bernard M. Gordon Professor of Medical Engineering and professor of computer science; Barbara Grosz ’69, the Higgins Professor of Natural Sciences at Harvard University and former dean of Harvard’s Radcliffe Institute for Advanced Study; and Farnam Jahanian, president of Carnegie Mellon University.

“One thing we see over and over again with technology is that it has an enormous impact. It just wasn’t the impact that we predicted,” said Grosz, also Pollack’s graduate adviser and longtime mentor. “And part of this thread of today is to make sure those unforeseen consequences are good ones.”

Manjoo said, “Because computing is everywhere, there has been this growing call for universities, for people involved in technology companies also to think about the societal implications of their technology, to think about ethics and equality, fairness.”

Higher education has an important role in addressing these implications, according to Jahanian.

“There’s no question in my mind that academia has to take the lead on this,” he said. “And that means bringing faculty members in computer science, social science and humanities … people who work in law and so on together to tackle these things.”

Speakers said the interdisciplinary nature of universities is part of their strength in attracting and retaining computer science faculty – many of whom could make 10 times their salaries in the private sector.

New workplace models that allow faculty to work for universities and industry at the same time are another way to draw researchers to academia, the speakers said. Computer scientists may also be tempted by the rich research data held by private companies, they said, but developing best practices for academics to access that data is a challenge for higher education.

“It’s a nontrivial problem, because with data comes questions of privacy and security,” Grosz said. Using companies’ data can also be problematic, depending on their motivations, she said.

“I have an ethical concern that Facebook wants a stamp of approval from a university, and I’m not sure we should get into that business,” she said.

The panelists agreed that one of universities’ most important roles in working with industry is preparing the next generation of talented employees. Balancing preparation for the workplace with a well-rounded education – as well as adjusting to students who are digital natives – presents challenges and opportunities.

“Students come to our institutions today saying not ‘I want to be an X’; they say, ‘I want to make an impact on Y,’” Grimson said. “And they see technology – with other pieces – as the way to do it.”

Technology also offers powerful tools for teaching. Analytics can help improve the student experience and close the achievement gap, they said, as does the opportunity to give students instantaneous help or feedback. Massive open online courses (MOOCs) may lack personalization and interaction, but they can help disadvantaged students access knowledge.

Grimson said he’s taught an estimated 16,000 undergraduates in his 35 years at MIT, compared with 1.5 million people who have viewed his MOOC. He also told the story of a 16-year-old boy from Ulaanbaatar, Mongolia, who scored 100% in a sophomore-level MOOC on circuit design – and graduated from MIT five years later.

“It’s not going to educate everybody,” Grimson said. “But it can level the playing field for somebody to then demonstrate to a Cornell or an MIT or a Harvard or a Carnegie or a Stanford or wherever, that I’m capable of doing this, and then you take a chance on a kid that you might not otherwise see.”