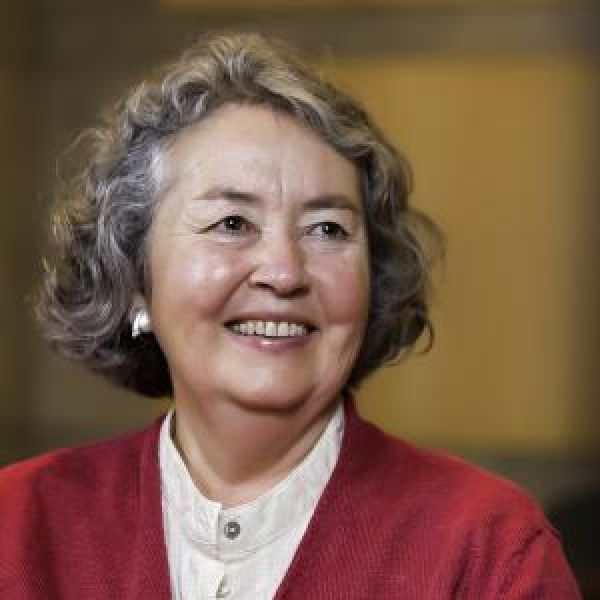 For as long as it’s been around, people have used lighting to set a certain mood. But now researchers at Cornell are using light to measure mood.

The result is a fun, interactive art installation in the atrium of the new Bill & Melinda Gates Hall called the “mood cloud.” It was developed and constructed by Cornell’s Interaction Design Lab (IDL), and is headed up by Information Science Professor Geri Gay and postdoctoral researcher Lindsay Reynolds. “The first installation we’re doing is an emotion meter,” says Gay. “We call it data as art.”

“This project exemplifies the interdisciplinary nature of CIS, and is a perfect example of the way people work today, by bringing together various talents and disciplines.”

Here is how it works. An iPad touchscreen shows a collection of images that correspond to emotions, such as cuddly kittens or serene landscapes. You tap on the image that best captures your mood. An algorithm then translates it to a color, which is displayed in an LED light string from a suspended acrylic sculpture. Feeling happy? Tap on the smiley face and your string lights up yellow. Feeling blue? Tap on a rainy photo, it turns dark blue or black. Up to 24 people at a time can enter an image, turning the mood cloud into a “mood crowd” that captures collective emotions across an array of 16 colors. But Gay says the applications for the research in capturing sentiment are much broader. For instance, it could also incorporate Twitter feeds “to capture the mood of the world.”

The hanging sculpture was designed by visiting Korean artist, Younghui Kim, a specialist in new media art. Its installation was a collaborative effort involving Cornell artists, computer programmers, social scientists and environmental architects. Gay says, “This project exemplifies the interdisciplinary nature of CIS, and is a perfect example of the way people work today, by bringing together various talents and disciplines.”

While the “mood cloud” is an artistic creation, it is based on research with broad relevance in other areas, such as healthcare. The cloud uses Photographic Affect Meter technology, or PAM, which was developed at Cornell to measure psychological affect and mood. This innovation is now being used in Mood Rhythm, a smartphone app that helps bipolar patients track their daily fluctuations in mood.

Although the first “cloud” installation will be used to capture emotion, it offers the potential to track many different kinds of input. And it could yield intriguing observations about the emotional life of Cornelians. If it’s a rainy day, will the collective mood be gloomy, turning the cloud dark? Will it turn a stressed-out red during finals week? Or a happy yellow the day before spring break? Visit the Gates Hall atrium to find out.