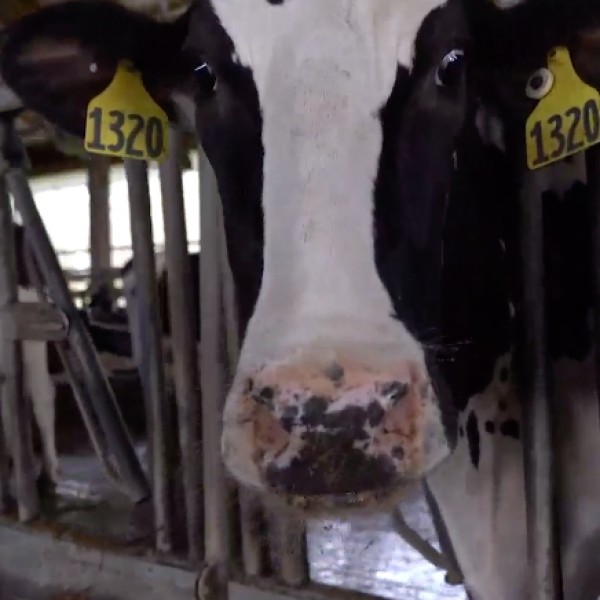 Colby Castle ’20, an animal science major who grew up on a cattle ranch, had heard of facial recognition for cows but never imagined how close the technology was to being widely used – or that he could have a role in developing it.

“Instead of having to go out and walk the entire pen looking for a certain cow, a mobile phone could tell you where to find her. I thought that’d be pretty cool,” said Castle. “It would be a very useful app, especially on larger dairies.”

It’s the kind of solution that might not occur to computer scientists, who don’t know much about farming, or to farmers, who generally lack expertise in machine learning and cloud computing.

But in a new collaboration, students from Dairy Herd Management, a spring 2019 class in the College of Agriculture and Life Sciences, teamed up with students in Topics in Cloud Computing, in Computing and Information Science, to learn how to work together to develop the kinds of digital tools that could reshape farming.

Castle and his classmates took around 10,000 photos of cows for the computer science students, who created software that would allow farmers to use smartphones to find specific cows, guided by cameras in the barn. Other ideas included using cameras in milking stations to monitor cows for injured hoofs or dirty udders, to anticipate and treat potential problems before they become serious.

“I never thought about agriculture and animal science before, but I think now that [computing] is changing the industry,” said Tian Ren, M.Eng. ’19, a computer science student whose team project aimed to predict cow pregnancies. “I’ve heard farmers say these kinds of tools really help them and they really appreciate them, so I think we’re doing something meaningful.”

The classes – along with doctoral students working with Abraham Stroock ‘95, the William C. Hooey Director and Gordon L. Dibble ’50 Professor in the Smith School of Chemical and Biomedical Engineering – are collaborating as part of the Cornell Initiative for Digital Agriculture, an effort partially funded by Microsoft. Microsoft provided the students access to its Azure cloud computing service, as well as training to understand some of its main features. For the computer science students, the dairy projects offered hands-on experience with the “internet of things” – an interconnected web of devices such as cameras, sensors and smartphones – as well as an opportunity to see its real-world impact.

“It gives the students a very concrete way to think about the applications, and it really helps them think through the entire sequence, from the sensors collecting data to the knowledge they’re trying to give back to the farmer,” said Ken Birman, the N. Rama Rao Professor of Computer Science and instructor of Topics in Cloud Computing.

“Otherwise people learn about a technology and it seems very dry and disconnected from any real use,” Birman said. “Here, they’re trying to make animals’ lives better and improve productivity, often at very small farms.”

“There’s been an explosion in the number and type of technologies available for farms, and it’s pretty unique for students to have a chance to see what’s behind them.”

Before they could develop projects, the students had to learn how to communicate. Animal science and computer science students are generally accustomed to working and collaborating in different ways, their instructors said.

“They need to talk to each other in order to come up with effective solutions,” Birman said. “It never occurred to the computer science students that they could enjoy sitting down over coffee and trying to figure out when a veterinarian has to be called.”

For the animal science students, the collaboration gave them a better understanding of the devices they’ll likely use once they enter the field, said Julio Giordano, associate professor of animal science and instructor of Dairy Herd Management.

“Right now, a person who understands dairy farming but also knows how to program modern computing systems has a tremendous advantage in the job market,” Giordano said. “There’s been an explosion in the number and type of technologies available for farms, and it’s pretty unique for students to have a chance to see what’s behind them.”

Sensors of all kinds are already in wide use in farming – measuring everything from air temperature to soil properties to leaf angles and plant health – so acquainting students with data management will help them figure out how best to use that information. “I wanted them to have at least a basic understanding of what’s behind the data analysis and data interpretation,” Giordano said.

Among the projects was a cloud-based machine learning algorithm to predict cow pregnancies. Arshi Bhatnagar ’18, M.Eng. ’19, said her team used live data measuring factors such as milk production and protein content to develop a model that alerts farmers about likely pregnancies. Meanwhile, the data are collected in the cloud and used to refine the model every six months.

“Eventually we’ll know whether our model’s predictions are right, so the goal is to use that data to try to improve our model,” she said. “We thought it would be really useful for animal science researchers as well as farmers.”

“Whether in the dairy or in the field, technology is transforming agriculture. Our students are getting chances to work on apps that can improve cow health, help farmers work more efficiently, and even to reduce the use of pesticides and fertilizer by only applying pesticide where an infestation is happening or only fertilizing where they need to. The impact will be huge,” Birman said. “Farmers need help from technology, and we want Cornell students to be participants in creating those technologies.”