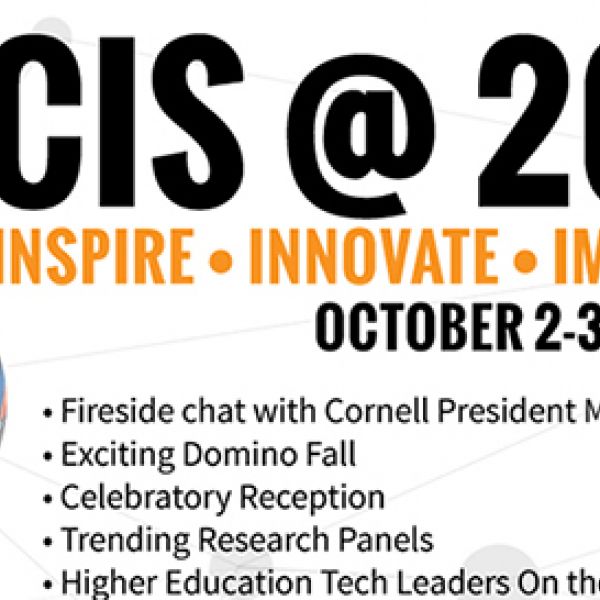 In 1999, the world was wary that the Y2K bug would wreak havoc on global computer systems, the Blackberry and Matrix was released, and Prince was realizing his ultimate party year. Here in Ithaca, New York, Cornell University was announcing the advent of Cornell Computing and Information Science (CIS), which was created to respond uniquely to the educational and scientific challenges of the advancing information age. Today, Cornell celebrates that over the last 20 years CIS has grown into a three-department powerhouse, which has seen its majors multiply sixfold in the past decade alone, its faculty teaching one in 10 Cornell students campuswide, and its research reputation reaching world-renown for prowess in critical computing fields. To mark its 20th anniversary, Cornell CIS is holding a celebratory academic symposium titled “Inspire • Innovate • Impact: Computing and Information Science @ 20” on October 2-3, 2019 in the Cornell Statler Ballroom. Registration and events are free and open to the public. For more information visit cis.cornell.edu/cis20.

“The celebration will be a fun and intellectually stimulating event that will commemorate how CIS has become a model and leader in integrating computing into every university discipline as well as a look forward to how CIS is shaping higher ed and technology for the next 20 years,” said CIS Interim Dean Jon Kleinberg.

The celebration kicks off on the evening of October 2 with a fireside chat focused on the creation of CIS moderated by Cornell University President Martha Pollack. There will also be a viewing of a celebratory 20thanniversary video, a domino fall created by Christopher Wright ’20, an engineering student whose domino creations have been featured on The Tonight Show, followed by a reception offering time to mingle with CIS-affiliated student clubs and PhD students presenting research posters.

Events being held in conjunction with CIS@20 include an exhibit at the Cornell Johnson Museum of Art titled “Digital Technology in Art: Celebrating 20 Years of CIS at Cornell.” The exhibit will run October 1-13, 2019. The Computer Science Department will also hold a colloquium series lecture on October 3 at 4:30 pm in Gates G01 with Barbara Grosz ’69 as speaker. Grosz is the former Dean of Radcliffe and the Harvard Higgins Professor of Natural Science. Cornell Homecoming 2019 follows the celebration on October 4-5.